I finally got smart and switched from my Muiras (size 41) to my Mythos (size bigger) climbing shoes. Duh! Tom was telling me to do this for weeks, but I get forgetting to put them in my car. They were way more comfortable on my damaged toe (which is taking its sweet time to heal. No noticeable improvement in a couple of weeks).

I went back to the new 10d/11a/11b route and tried again, failing on the same last move. I thought this route was harder than the 11b with a one other very hard move below that served to sap all my strength for the final hard move. I decided to give it one more go, even though I was tired, just to learn the bottom sequence better and set it up for sending on Monday. I was surprised to just barely scrape my way to the top clean.

Another five 5.11 session, so I'm solidifying things in the 11- range. Next week I'll go back to the blue 11c and see if I can get that baby.
Posted by Bill Wright at 9:46 AM No comments:

Went hard today. It had been awhile since my last tempo effort (9 days) and needed to suffer a bit. I really wanted to PR on this loop, and I did, but I still haven't worked out the pacing. I started too fast and lost over a minute on the Old Mesa climb and then a bit more in each of the last three miles. I'm less than 100 seconds away from my goal of breaking 90 minutes on this course. When it's warmer, there is no ice on the trail (held me up a bit, but not much), I'm five pounds lighter, my toe is headed, etc., then it will happen. I have high hopes of pulling this off by May.

Here is a comparison of my mile splits for today and my previous PR:

This morning I finally had a solid session in the gym, but it cost me some pain. Frustrated that I couldn't complete that 11a on Monday, I resolved to endure the pain and put a climbing shoe on my right foot. I warmed up with my approach shoe and did a 5.9, 5.9, and 10a (hard one). Then I switched to my climbing shoe. I'd endure the pain to the top of the route and immediately pull off the shoe while being lowered to the ground.

Next I got on the 10d where I grabbed the draw on Monday and fired it clean. I then went to the green 11a where I had fallen on the last more three times in a row. Clean. Then I the orange 11b with the brutal sequence at the lip of the roof. My first effort was up to the crux and then I fell. I worked out the most efficient sequence and finished the route. On my second go, I sent it.

Then I went back to a neat 11a arete route where I hung once on a couple of weeks ago. This time I moved through the crux section quickly and felt very comfortable sending it.

Getting froggy, I got on the 11c I tried a week ago. I got the first five clips clean, but had to grab the last draw to clip it. I hung and then just barely finished. I'll keep working it.

I switched back to my approach shoe and warmed down on a 10a.

Gym went reasonably well. Warmed up on a 5.9, then a 10a, 10b, and then onsighted a 10d, barely. I tried another 10d and grabbed the 4th draw, clipped, but did not hang, and then finished the route. I need to go back and clean that baby up, but today I moved on to a tough 11a that has been bugging me. I made good progress on this. My first time I made all but the last clip, hung, and then finished. I tried three more times and each time made all the clips and got to the last move before falling. It's a tough last move as I have to stand on my right, non-climbing shod foot and grab a very high, rounded undercling with my right hand. I just need to pull up into this and get my left foot up and I can then grab the top. It should go on Wednesday and probably on my first try. I might even brave a climbing shoe on my right foot to give me that extra edge.

Nine routes is a big morning for me, but I was just climbing with Corey the entire time, so only two of us.
Posted by Bill Wright at 9:03 AM No comments:

I've done this loop three times now and the last two Saturdays. This was my first time doing it solo. Last weekend I ran with Mark and expected to do a lot better than our previous effort. I felt this way because I'd been running the Old Mesa Loop and feeling strong at the end of that 10-mile loop. But I faded very badly after getting to Eldorado Canyon. Even running down the road - downhill, smooth surface - my connective tissue was seizing up. I could no longer take a regular stride. My groin, hips, and knees were just locking up. I was okay hiking up the Old Mesa Trail, but as we progressed along the difficult Mesa Trail back to the start at Chautauqua Park my gait bore a closer and closer resemblance to Frankenstein's walk. It was disappointing.

Mark tried to dismiss my poor performance by blaming it on my previous weekend attempting the Bells. I frost damaged my right big toe and it is still causing me quite a bit of pain on the downhills. Today was slightly better, but it is still very uncomfortable. I could have had a bad day or maybe I just need a bit more distance training. To be clear, I wasn't disappointed that 19 miles was hard, I was disappointed that I was falling apart after only 11.5 miles. I speculated that my pace rapidly slows once runs get longer then ten miles. Something like this: 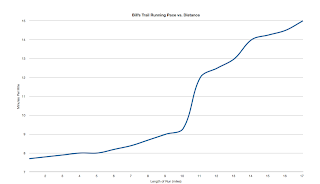 So, I went back today to give it another try.

I had an appointment at 11 a.m. and knew it would be a challenge to break 4 hours, so I started at 6:35 a.m. I was pleasantly surprised to not need any light at all. I trotted over to Gregory Canyon and ran/walked up it. There were only a couple of sets of tracks up Long Canyon and it was completely snow-covered. I got to top of the Flagstaff Road in 52 minutes and prompted went down the wrong road - a long driveway. Doh! I backtracked and got onto Bison Drive.

It was still really early, but this road is so nice and smooth and almost all downhill and I was able to roll a 7:15 mile. I got to the Walker Ranch trailhead and ran down to the Eldorado Trail. I mostly hiked up this steep trail. After ten miles I saw my first people. I passed four people before arriving at the Eldorado Ranger Station to refill my water. I was in and out quickly and ran down the road much better than last time, doing an 8:38 mile. Sure, that isn't fast, but it was a normal stride.

I hiked up the Old Mesa Trail and found that I could still run semi-normally. This is a tough trail to run when you are fresh and I was far from that. I wanted to break four hours and now I figured if I ran well, I could break 3:50. I ended up doing 3:44, for an average 11:38/mile. Nothing miraculous, of course, at my very best I'm mediocre, but a solid improvement over last time. I plotted my actual run speed on this graph, though it isn't much data: 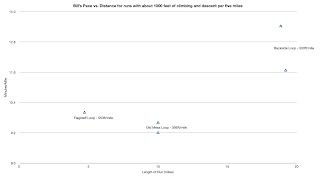 Posted by Bill Wright at 7:10 PM No comments: