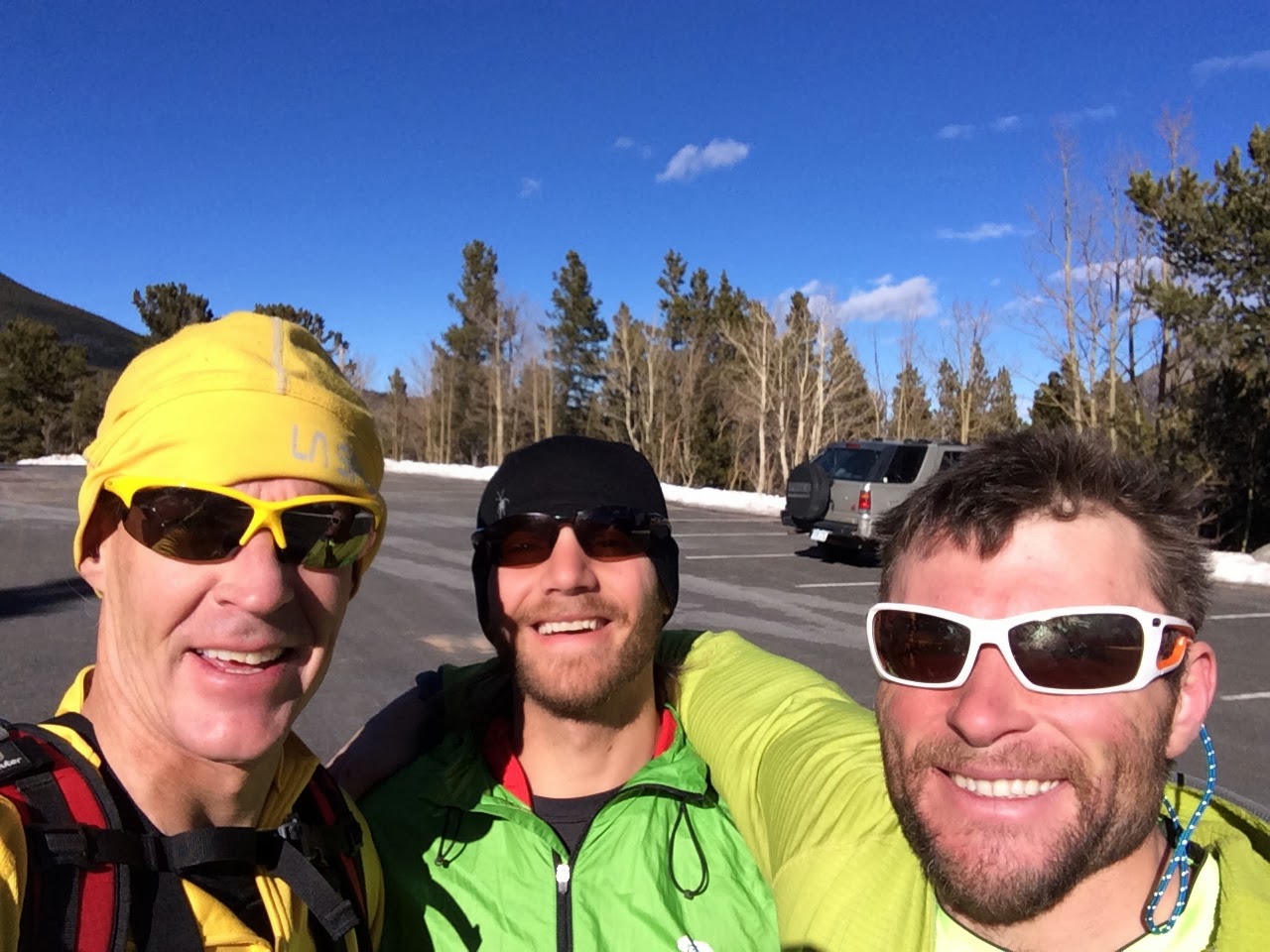 When I got a response for partners to climb Longs Peak, my wife asked, "Is that a good thing?" Indeed, it isn't so simple for me these days. Yes, it is a very good thing if you really want to climb Longs Peak in January. No, if you really don't want to climb it and just like the idea of being competent enough, tough enough, fit enough. With partners I was now committed to going up Longs. The weather report wasn't ideal (16 degrees with 25+ mph winds), but not extreme enough for me to wimp out, though not far from it.

Jason Antin agreed to be my partner and he recruited 20-something, ultra-running Brandon. I was now the odd man out in my own adventure. Or I would have been with lesser companions. These guys are super strong, impervious to weather, and apparently tireless. I'm none of the above and it is a testament ot their character that they shepherded me to the summit and back.

We met at 5:15 at the usual north Boulder location: the gentleman's club of The Bus Stop. We were hiking at 6:20 in surprisingly warm temperatures. We walked pleasantly to tree line, where all pleasantries abruptly ended in very strong headwinds. Jason tool the lead to try and give me a draft, but I couldn't keep up and fell behind the other two. My position as the weakest link in an adventure has become quite common, though I'm still adjusting to it. I do feel lucky that partners much stronger than me will still accompany me, though.

I had to switch to my mittens, as my hands were freezing and I wore two hats and the hood of my shell to try and keep my head warm. On my feet were...La Sportiva running shoes! Covered in the discontinued neoprene Kahtoola Flight Boots, which did a good job of keeping my feet warm, along with the toe warmers I had in there. Jason and Brandon were in mountaineering boots and carried crampons. We all had ice axes and Jason carried a 60-meter 7.8mm rope and I had our rack of three cams and three slings.

My companions would occasionally wait up for me and that helped me arrive at the base of the crux pitch not long after them. Jason let me salvage some pride and I led the technical pitch on the North Face. There was some water ice here, which isn't really an option in my cleated boots. I stemmed around it and concentrated on the bare rock sections. A lot of this pitch is covered in easy snow and there are good stances to place the gear. Soon I was at the top and belayed both Jason and Brandon at the same time, as they were both tied into the end of the rope with Brandon just twenty feet above Jason.

Above the crux we moved slowly to summit. Slowly because they insisted I stay in front, probably so I either didn't lose my way to the top or so they wouldn't freeze on the summit, in the brutal wind, while waiting for me. On top, we didn't stay long, due to the miserable wind. My feet were starting to freeze and I needed to move. My feet always warm on descents as I can move my legs quite a bit faster, forcing blood down to my extremities.

I was surprised to see that my 60-meter rope did not get us all the way down to the snow. There was a tricky downclimbing section with some nasty ice. My companions managed it unroped, but I balked and pulled the rope and set up another mini-rappel.

As we descended to and crossed the boulder field, the wind progressively increased. By the time we hit the shoulder of Mt. Lady Washington, where the terrain heads steeply down after a long horizontal section, the wind became unreal. If you were standing up, you were in danger of being slammed into a rock. The wind was at our back and to prevent being blown straight into a rock, you had to lean back at an exaggerated angle. If the wind was in our face, we'd still be up there, as the only progress you could make into that wind would be crawling on your belly like Mawson's men of the AAE. I really can't estimate the speed accurately, but it was by far the strongest wind I've in. I wouldn't be surprised if it was 100mph. The crazy thing was, though, that it wasn't a gust. It was constant. Brandon would say later that he was just going to sit and wait it out, when he realized it wasn't stopping. We had to move off the shoulder and down the slope. This was dangerous and it took so much energy that I'd be wasted for the rest of the hike out. A hundred yards down, the wind returned to its usual 30-40 mph and we continued.

Finally down below tree line, I was struggling to keep up again. I felt like a little kid trying to keep up with his parents. I'd have to run every few minutes to close the gap, only to fall off the pace once again. Perhaps if I fell far enough behind Jason just just scoop me up, throw me over his shoulder and I'd be asleep by the time we got to the car...