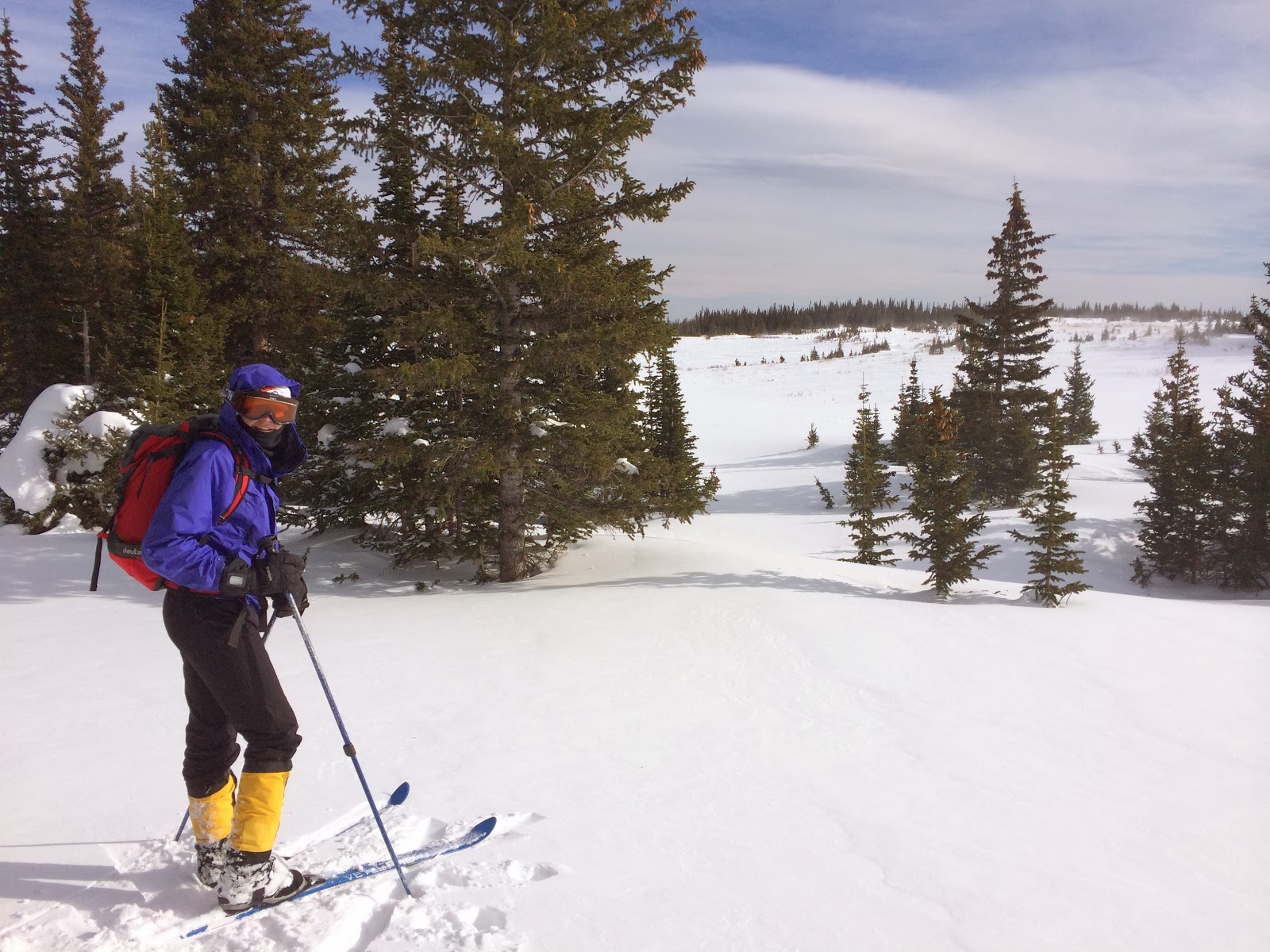 Derek has decided he likes adventures and wants to have more of them and is committed to learning the necessary skills. Since it is winter we're working on backcountry skiing. Our first two outings were okay, but it was frustrating for him. At the end of our second trip, an aborted version of this trip, he really started to get the hang of it. Hence, we went back to complete this loop.

He was driving this and when I suggested a later starting time he asked, "Why so late?" So we drove away from the house at 6:20 a.m. and got to the Brainard Lake parking by 7:30. It was super windy in the parking lot, but we were undeterred, knowing we'd be sheltered in the trees. We geared up and took off.

On our last trip it would literally take me just a few seconds to be out of sight of Derek, without even trying. He wasn't motivated then. Today whenever I looked back, Derek was practically on top of me. He was matching my cadence and so in sync that it was as if we were competing at the Olympics...in super slow motion. In fact, watching the Nordic races in Sochi inspired Derek to give it another try and he was really smooth all day, easily keeping up with me. So much so, that I put him in front!

We made fresh tracks all the way up to and around Brainard Lake. We rotated the lead every half mile. Once headed back east we followed the tracks of snowshoers, XC skiers, and a fat-tire bike! It was really windy on the west side of the lake, but it wasn't long before we were back in the trees and descending. Derek is getting more comfortable heading downhill and we did a few kick-turns in the woods to flatten out one steep section.

We stopped a couple of times to eat and drink, but we never sat down. Derek led the mile-long climb back to the car and we finished up around 11 a.m. We did 8 miles and about 1000 vertical feet of climbing in 3.5 hours. We took if very casually, obviously, but it didn't seem like we were out that long. Derek wasn't fazed at all by the distance and time, so he clearly improving. It was a fun way to spend the morning. 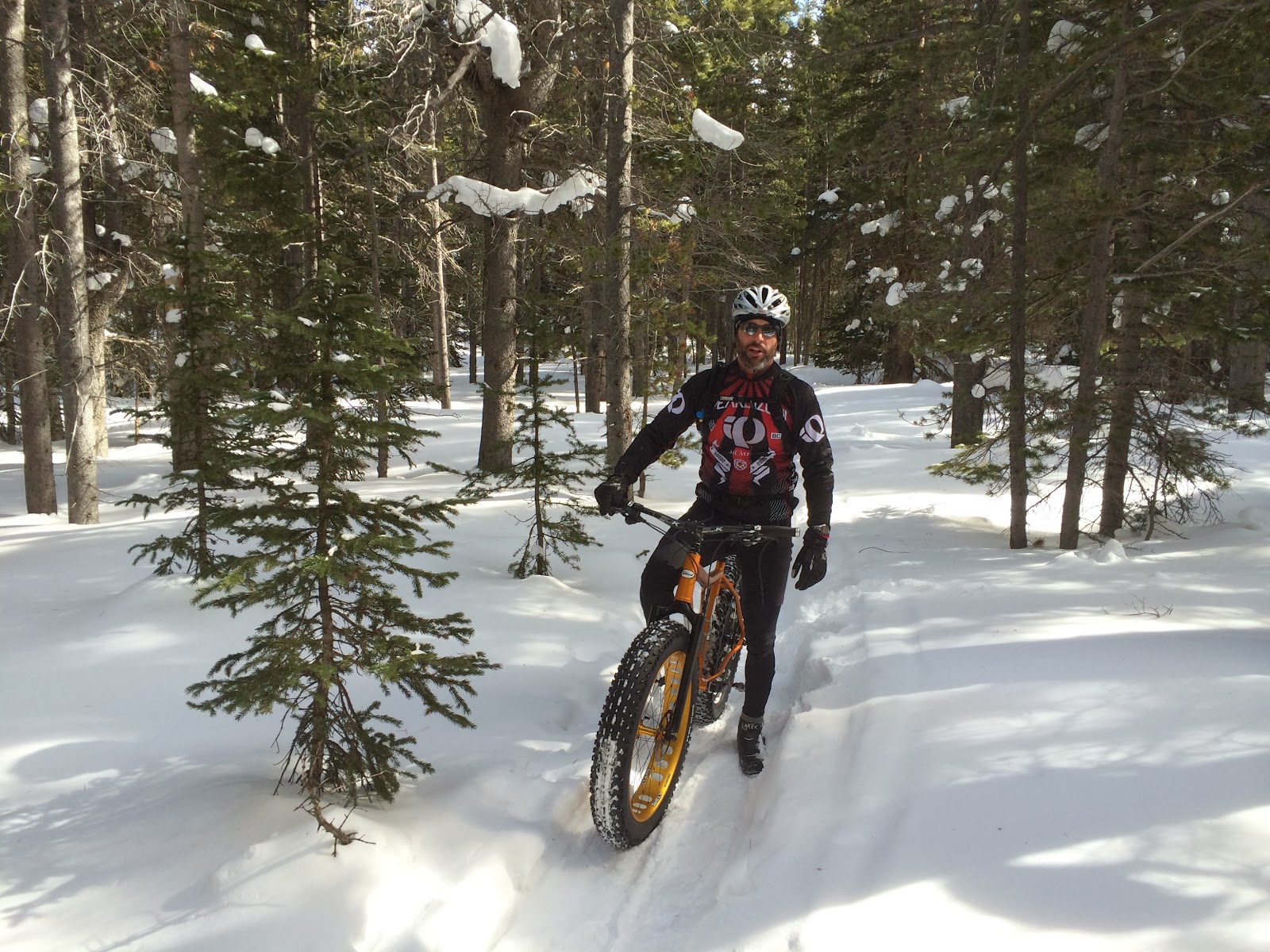 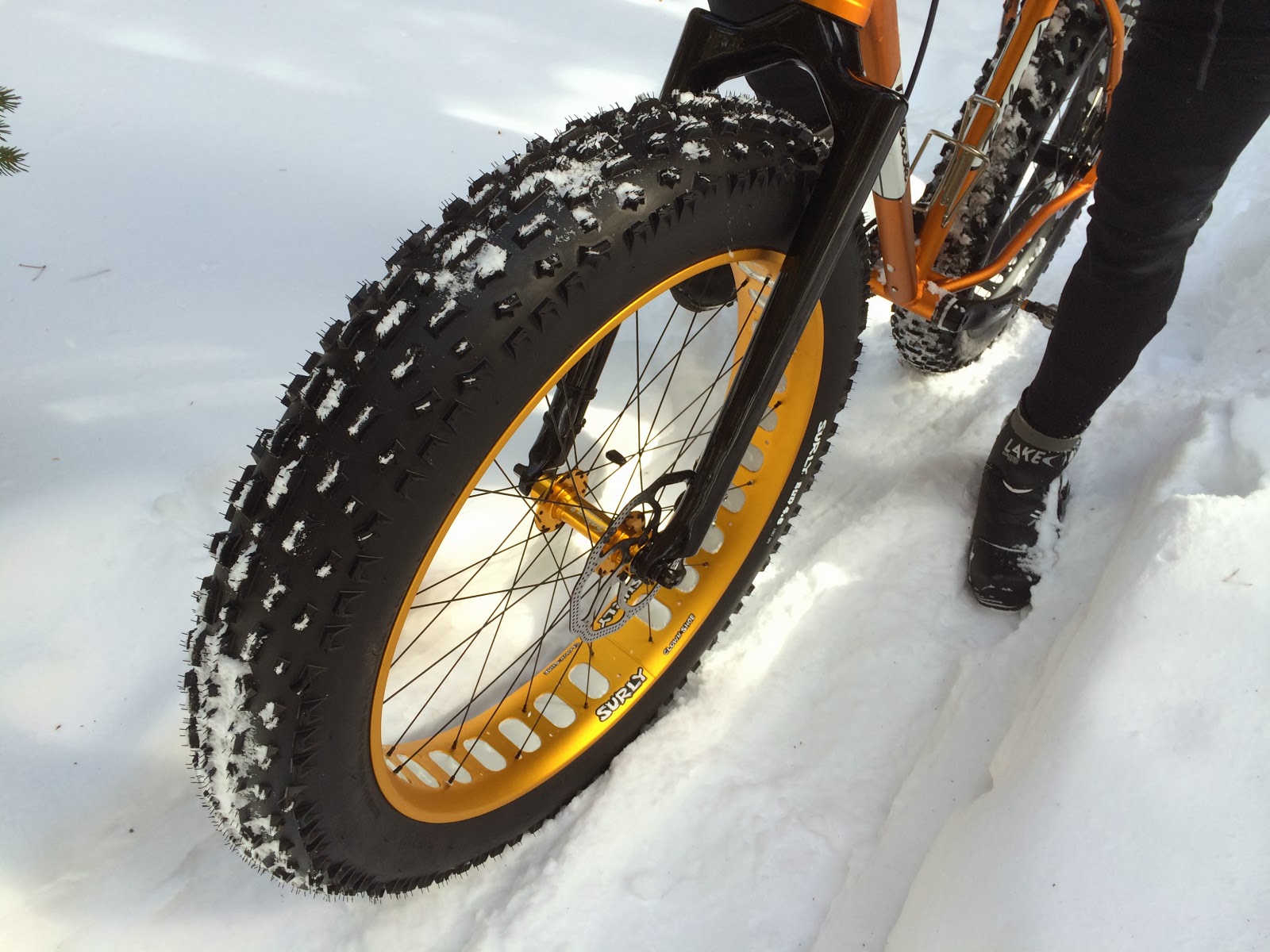 The Eldo Season Has Officially Started! 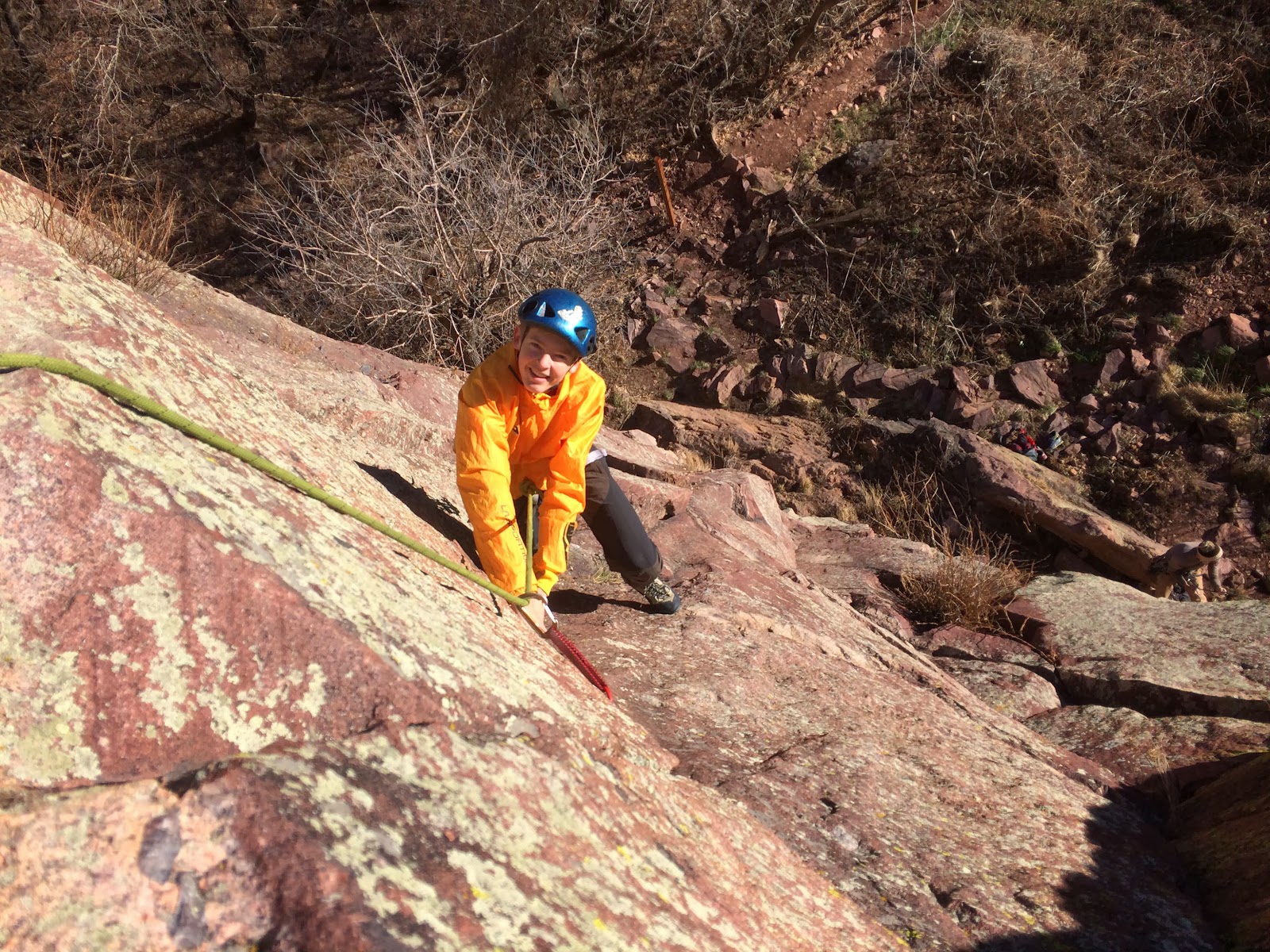 We finally had some warm temperatures here in Boulder, but the tremendous winds on the drive over to Eldorado Canyon had me thinking that Derek and I would just be doing an afternoon hike instead of our first outdoor climb of the year. Alas, the weather was very climbable, though we both wore our wind shells.

I asked Derek if he'd like to do Wind Ridge (5.6) or Touch and Go (5.8+/5.9-). He'd had more than a little trouble with the burly, technical start of the latter route and I figured he want to start out easy. I was wrong. He immediately chose Touch and Go. We hiked over there and found a couple on it. The guy had just finished the first pitch and I asked the girl if they were doing the second pitch or not. She wasn't sure, but then the guy asked to be lowered to the ground. When he got there he told us, "We're going to be here for awhile." I asked, "So, you're just going to do the first pitch over and over?" He said, "Yes, while we have the rope up there." Dang...

From my 100-pitch Eldo training, I knew the 5.9 variation to the first pitch on the right and I led up that. The climbing here is a bit tricky, a bit runout in spots, and pretty slick. I moved slowly and methodically, placing good gear and making sure I was solid. I was just getting used to Eldo climbing again. Derek followed remarkably well, cranking the crux 5.9 without much hesitation.

I led the second pitch along the ramp to the second pitch of Touch and Go and then up the steep, thin dihedral above. Once again, I placed solid gear at frequent intervals, nothing like the last time I did this route with Hans simul-climbing below me. Derek followed very nicely. I was impressed. Onsighting this route shows that his gym training has made him a stronger outside climber as well.

Derek then "led" us over to the rappel anchors. This was technically his first lead, though he didn't place any gear. We then did two rappels to the ground. The significant fact was that Derek rappelled by himself for the first time. I'd been overly protective in the past and just lowered him down. We never took the time to teach him how to rappel before, but early this year I taught him in the gym. It was easy for him to learn since he was belaying and lowering climbers and it's basically the same thing, but with yourself. He did great and was pretty smooth by the second rappel. 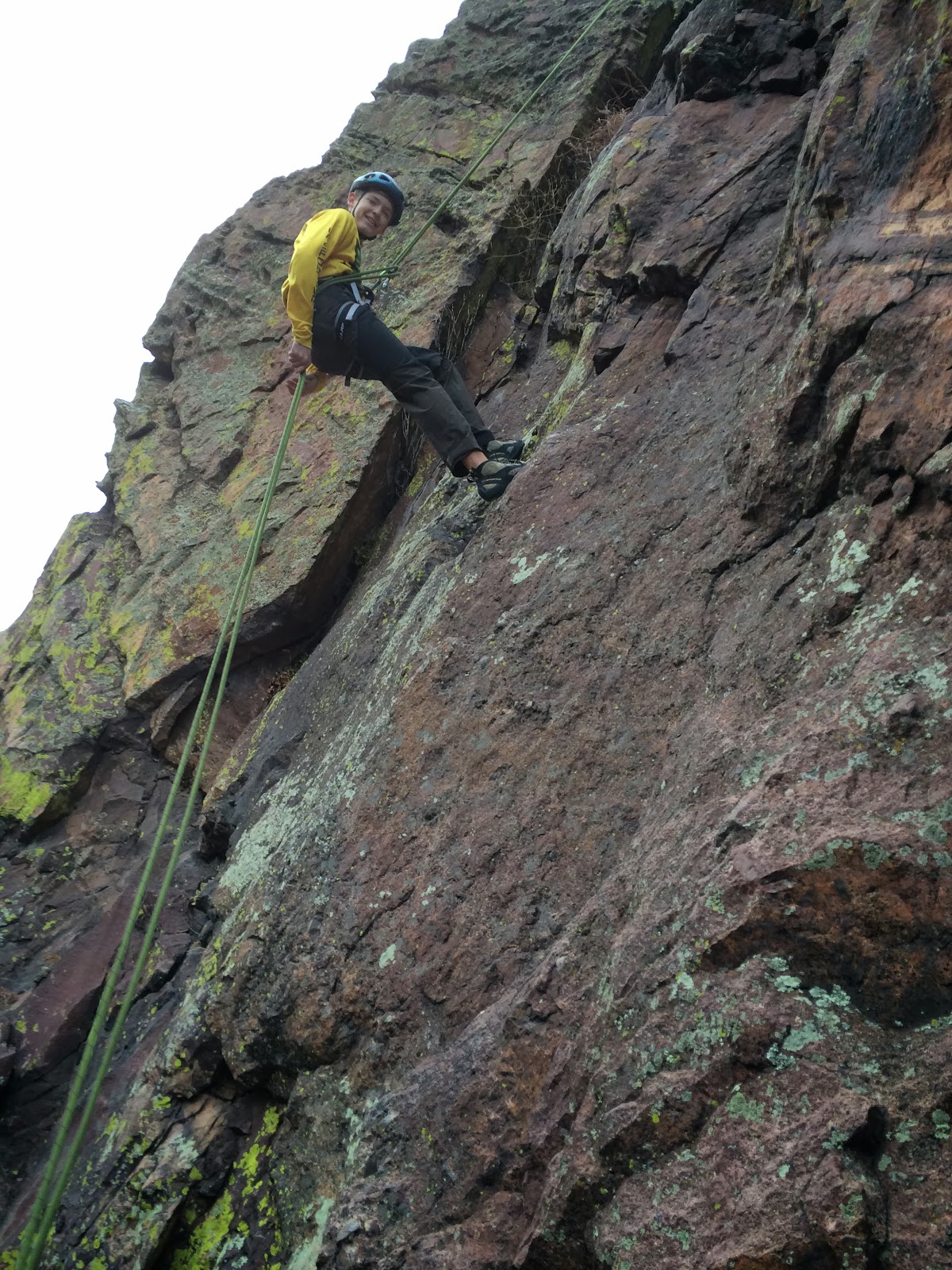 We pulled the rope, packed up and hiked back to the car. The round trip from the house was about three hours. It was great to finally get outside on real rock.
Posted by Bill Wright at 6:40 PM No comments: 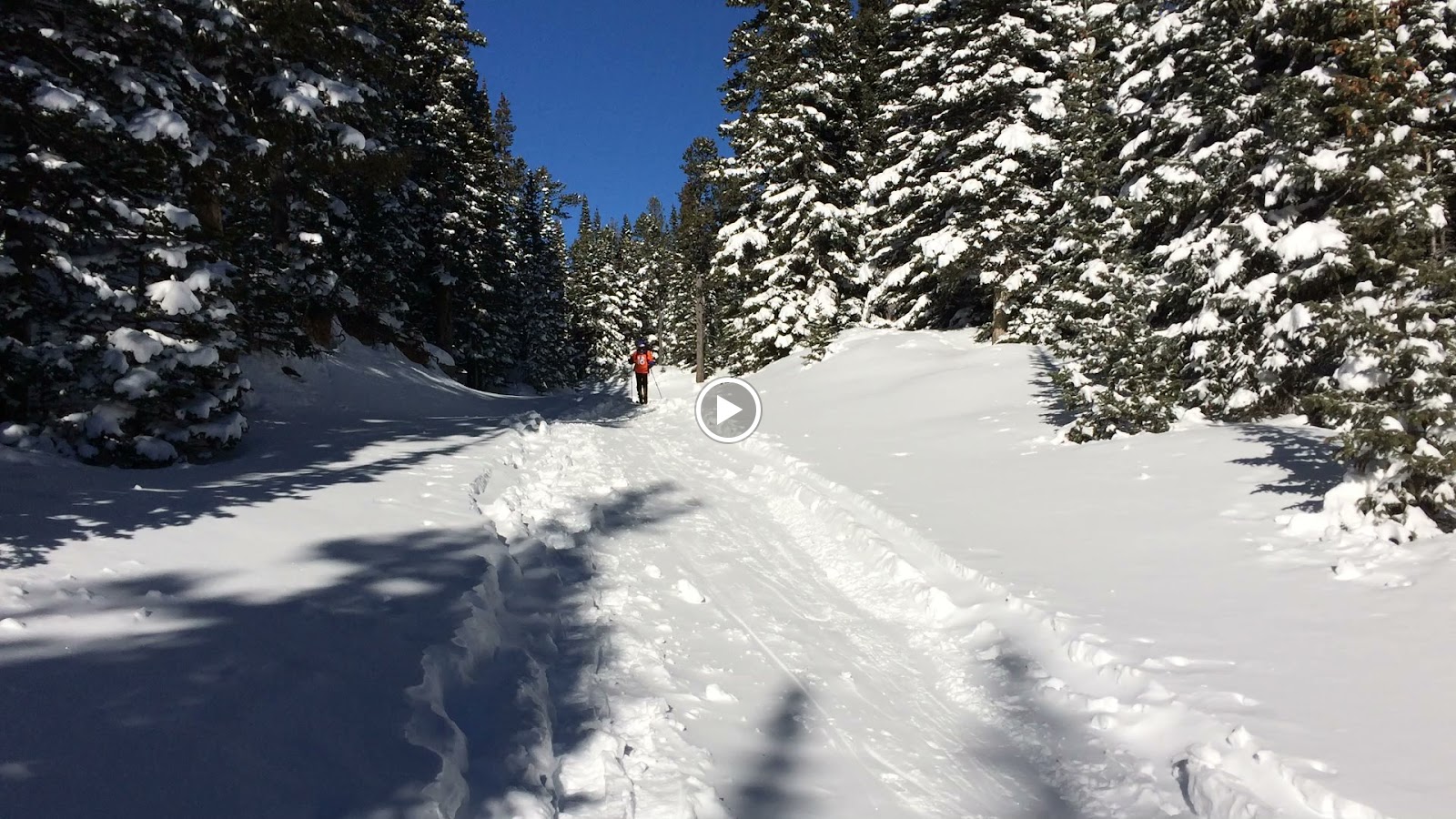 Derek has recently decided that he wants to get into adventuring with me. What more could a father ask for from his 16-year-old son. Now we're concentrating on building up his skills a bit. We started first in the climbing gym at Movement in Boulder. He's now been climbing for a couple of months, two days a week. He's gone from TRing 5.7's to now leading 5.11c. He's led a number of 5.11a's, one 5.11b, and is now working a 5.11c. He's done it clean on TR and now has four lead attempts on it, three of which he only fell once. He seems to have no fear of falling and is fast improving. He's clips are polished and he's deciphering sequences better and faster.

Yesterday in the gym, I sent my 12a project on my 20th try. I'd love to say that I'm setting an example for tenacity for Derek, but in actuality I'm just showing off my weakness. This is the hardest grade I'll ever climb. I suspect Derek will be climbing harder before the end of his first gym season. With my project dispatched, I moved on to another 12a. I tied into a top-rope and proceeded to fail on the first hard move to tiny, small edge. I fell off 5 or 6 times before giving up and moving on to another route. As I untied from the rope Derek calmly walked up to the route and easily bouldered out the first few moves... Punk.

Today we went out for our second day of backcountry skiing. On our first day a couple of weeks ago, we did six miles in Wild Basin. Our goal today was an 8-mile loop around Brainard Lake. Derek was all for it when I woke him up at 5:45 a.m. At the parking lot, he was still keen, even though it was very windy and cold (5 degrees?) outside. We started up the trail, well dressed and warm, and it wasn't long before Derek was lagging far behind. He didn't seem to be putting any effort or enthusiasm into the skiing. I was moving along at a very slow pace (2 mph) and he was falling behind. I didn't know why and kept checking with him but he said he was fine. He was not.

After two miles I skied back along the trail to find Derek stopped and calling for me. He said he wasn't having any fun and wanted to go back. I asked why. He said he just wasn't getting it. He didn't have the hang of skiing. He was picking up his feet with every stride, like he was hiking. I tried to gently coach him to slide his skis forward instead. If he was trying, it wasn't showing. I told him that I'd been skiing for 40 years and he couldn't expect to master skiing in just two days. 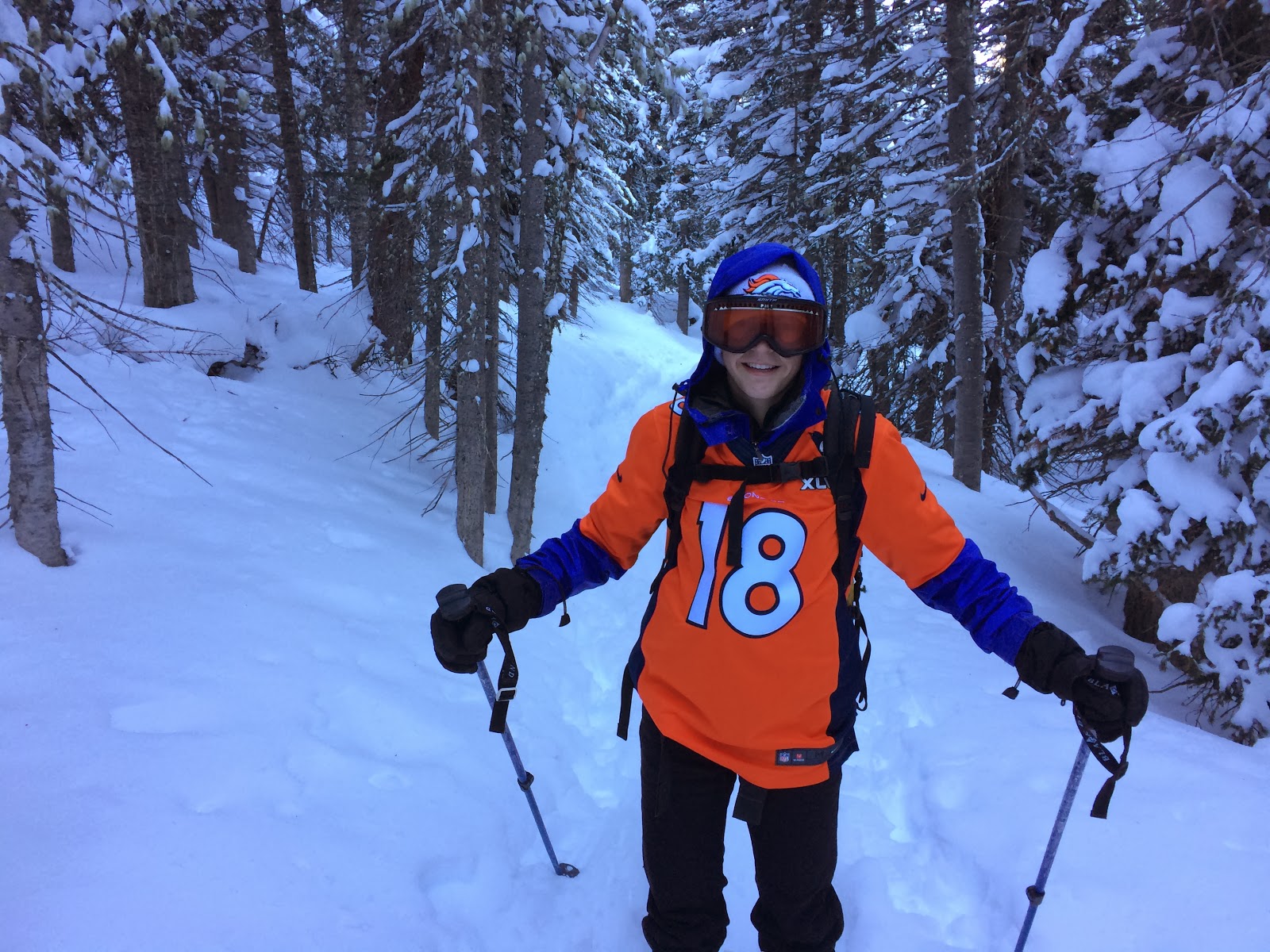 But he didn't have to like skiing. We didn't have to do it together. I love him so much and doing anything with him is a thrill for me. Heck, I love just watching football with him. If we get to adventure together, great, but if isn't backcountry skiing that's fine. We were only doing this because it was the season for it and backcountry skiing is the best way to approach winter peaks and have an adventure. I told him that most people don't like going uphill in winter. That's why downhill skiing is so much more popular than backcountry. Adventuring in winter is tough. It's cold, windy, and a lot of hard work. It's okay if he isn't interested in that. Most people aren't.

I told him all this and we turned around. Derek immediately perked up. He kept right on my tail on the way out. He slid his skis along the snow instead of lifting up his feet with a hiking motion. When he fell on a couple of times on the downhills, he smiled, shook it off, stood back up, and was ready for more. By the time he got back to the car, he was really enjoying himself. He changed his mind on skiing and decided to at least try it one more time. I have no doubt he'd be a great skier and a great adventurer, if he truly wants to be. And if he doesn't want to be, that's fine too. At least he's on track to be my summer climbing guide...
Posted by Bill Wright at 4:02 PM No comments: