In 2008 I climbed Longs Peak every month of the year by a different route. I called it my Longs Peak Project. It was inspired by Bill Briggs who tried it a couple of times, but the best he did was eleven months of different routes. It isn't an elite challenge, of course, as I'm a very average mountaineer, but  I don't think anyone else has done it. Anton Krupicka announced that he was going for it in 2013 and even had a goal of climbing Longs 52 times throughout the year. I don't think he completed it though. I think injuries, travel for races, and other things got in the way. This year, Charlie Nuttelman told me he was going for it. I'd thought about repeating it myself, but thinking about doing it turns out to way easier than actually doing it.

Charlie and I, along with John Ortega, attempted Longs a couple of weeks ago. The weather report called for brutal winds, but we went anyway, hoping to find shelter in the Loft Couloir. We did not. I was the first to be overmatched. Charlie and John are both incredible, accomplished endurance athletes - far  superior to myself. My only advantage was my experience on the mountain, but it didn't count for much against the gale pushing against me. When the wind only increased in the couloir, Charlie, the strongest, called it off.

Charlie vowed to wait for the best weather and go for it again. I said I'd join him and Thursday the report looked great, with only 10 mph wind, clear skis, and reasonable temperatures. We met in Boulder at 5 a.m. and were hiking by 6 a.m. I wore the La Sportiva Crossover shoes that I picked up the day before. These babies are the best winter running shoe. Bar none. If you live near the mountains and like doing stuff in the winter, then you need these shoes. If you put hobnails in the soles, there's very little you can't do in them. Because of the 14,250-foot elevation and January temperatures, I did wear a Kahtoola neoprene overboot. Unfortunately, these have been discontinued, but this combination is good down to sub-zero temperatures for me and I have very bad circulation in my feet.

We had great weather all day. It wasn't bluebird sunny most of the time, but we had very little wind, even at the top of the Loft. The snow conditions were nearly ideal as well. We walked the lonely, icy hard Longs Peak trail up to the winter shortcut and then up to the intersection with the regular trail, arriving there in just under an hour - a good time for the winter.

We headed up to Chasm Junction and then towards the eastern cirque. The snowfield traverse before the hanging meadow was very firm, but there were some steps kicked and we continued sans crampons and just using our poles. We followed talus and firm snow up to ice over the cliff near the top of the Loft. The ice was particularly fat, both in the main area on the narrow gully on the right. We weren't here to climb it, nor were we equipped. Our sights were on the summit.
We took the bypass ledge on the left and it proved a bit challenging to gain. Once on it we had to be very careful not to slip on the ice and go over the ever growing drop on our right. Donning crampons would have made this much safer, but we didn't want to bother and just moved very cautiously.

The Loft is a great winter route up Longs because a rope isn't necessary, but there was another reason I wanted to do this route. I'd heard (and I forget where now...) that the Clark's Arrow traverse was "gone." I didn't expect to have any trouble with the new route, but did expect to see...something. I noticed no change in this route whatsoever. And I know this route well. If the rock upon which Clark's Arrow was drawn fell over, okay, but that's the only change here, if that. I didn't see the arrow this time, but I frequently don't see it.

We climbed up to just below the backside of the Notch Couloir and then did the exposed traverse over to the Homestretch. The snow here was so hard, that I couldn't lead it without putting on crampons. Fortunately, Charlie, in his mountain boots, was able to kick enough of a step for me to follow. We protected ourselves by plunging our ice axe shafts to the hilt. This was hard enough work where I just reused the holes Charlie made.

Charlie felt the Homestretch was the crux of the route, but he didn't have any traction on his boots. The cleats on my overboots worked pretty well for me and I picked my way up tongues of snow and rock to the summit. This last section was very tiring and I had to take a few small breaks to catch my breath. We didn't stay long on top, 5 or 10 minutes. We signed the register and and took some photos and then reversed our tracks back to the Loft.

I had only brought forty ounces of liquid and was now out. That was a mistake. I'd be fine, but dehydrated by the time I returned to the car. Despite this, we decided to tag the summit of Mt. Meeker, as it was only 500 feet above the Loft and the climbing was almost entirely class 2, with a touch of class 3 scrambling just before the summit. We did this in about 25 minutes. We dropped our packs at the saddle to speed things up and bit and when we got back to the packs, Charlie graciously shared some of his remaining water.

The rest of the descent went nicely, working with, instead of against, gravity. We were careful on the icy section of the ledge and then I did a bit of very controlled glissading on the descent of the Loft. Charlie, in his stiffer mountain boots, was able to heel plunge down this section. We met our first person of the day when we were within fifteen minutes of the trailhead. Longs Peak isn't very crowded in January. The summit registered revealed an ascent on the 2nd, 10th, 15th, and then our ascent on the 29th. 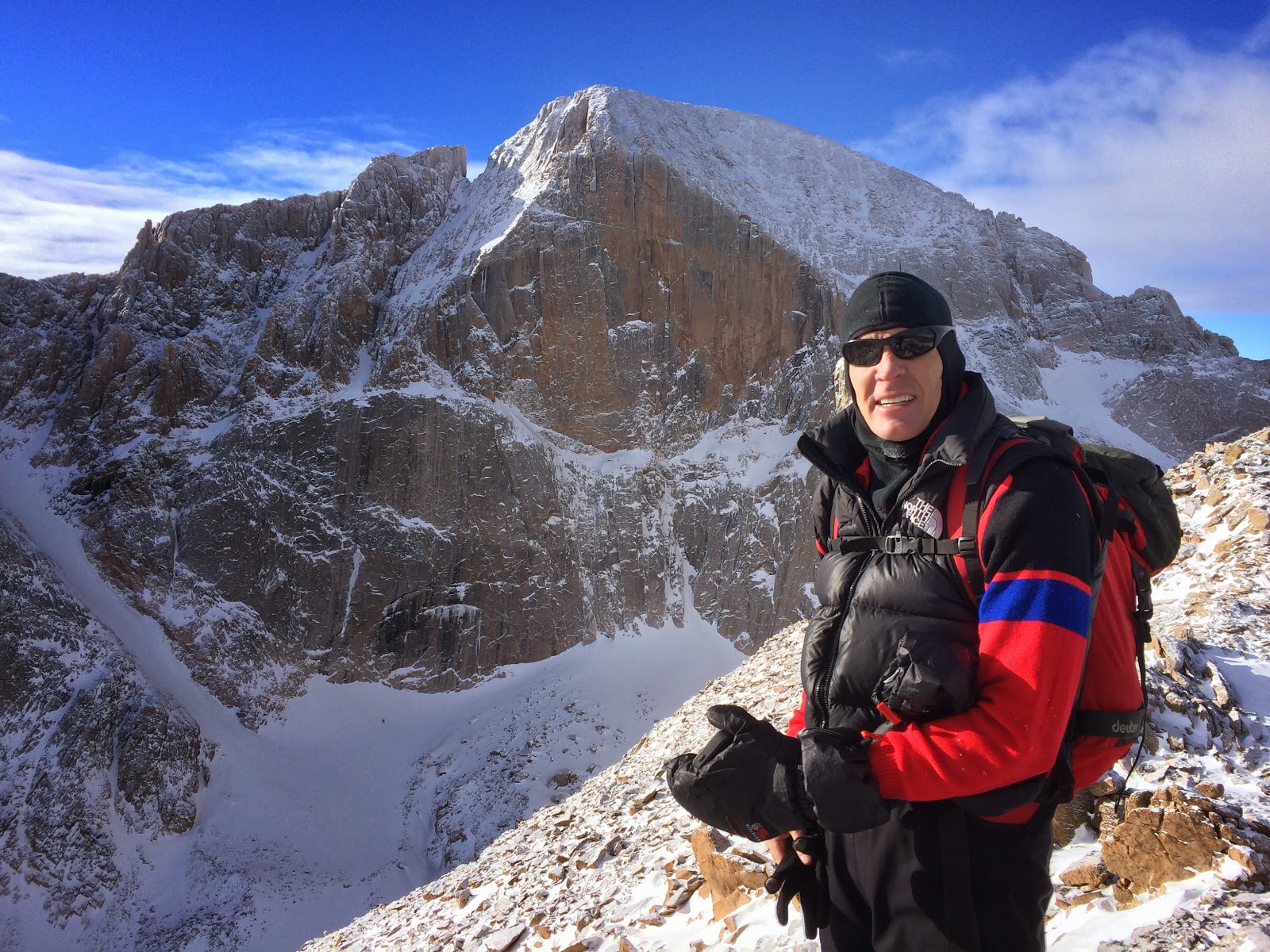 I like to make goals for each year. In the past a lot of these have been performance related and I have some modest ones this year as well, but as I get older and slower, I'm trying to concentrate on just making sure I do some cool things. One goal I came up with for this year was to climb 52 unique summits - averaging one per week. I did Flagstaff on New Year's Day and today Mark and I went up Mount Lady Washington (MLW).

MLW is a satellite summit near Longs Peak. It is 13,281feet high and requires about 4000 feet of climbing to reach its summit from the Longs Peak trailhead. Despite only a thousand feet higher, climbing Longs Peak is roughly twice the effort of climbing MLW. Which is why we headed for MLW. While it was quite cold today, there was almost zero wind - an extremely rare event in January.

This climb is merely a hike and went very smoothly. We didn't see many others on the trail, just five on the way up (two headed for the Keyhole Route on Longs and three headed for Martha's Couloir on MLW) and three on the way down (possibly headed for MLW). We put in the winter shortcut track on our way up and improved it on the way down. There was some serious postholing in a few short sections, but no big deal. Above tree line I was surprised to see the trail completely covered in snow. This is usually blown off this time of year. Mark and I wore Microspikes on the way up and they proved nice traction.

It took us 3h17m to reach the summit and by then both of us had pretty cold feet. Mark was in leather boots and I was in plastics. I also had footbed heaters in boots. Nothing else was cold on me. We took a couple of short breaks to eat/drink on the way up and one on the way down. We did the roundtrip in 5h25m and were back at the car well before noon. It was great morning at high altitude.

Fifty summits to go!
Posted by Bill Wright at 11:19 PM No comments: