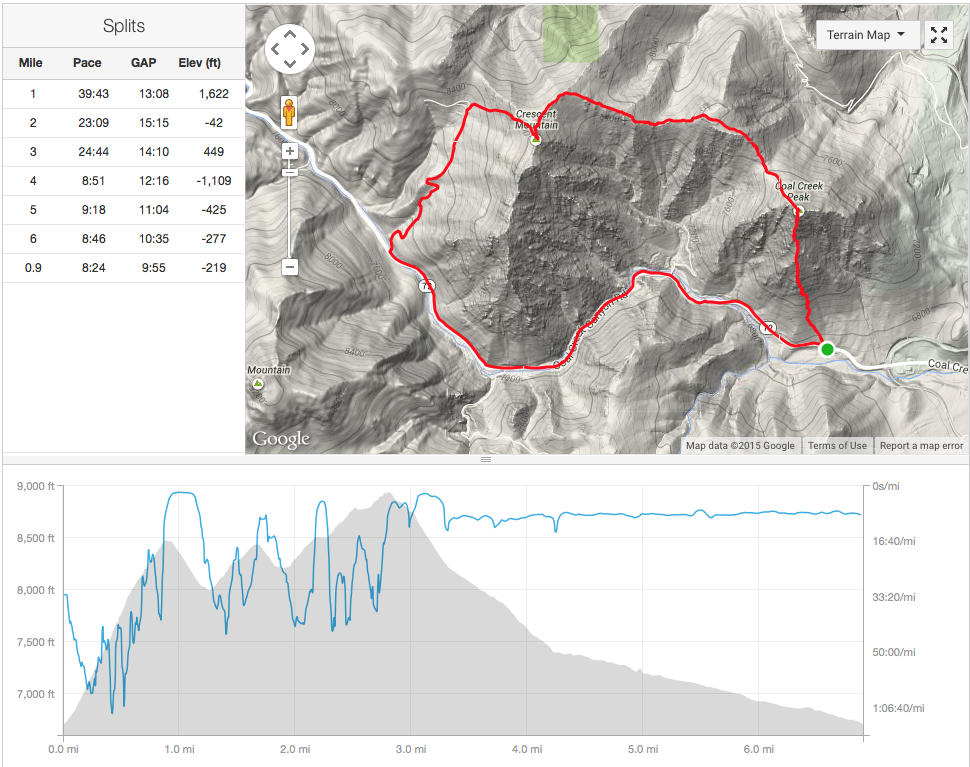 I haven't been much for bagging insignificant summits, but this year, somewhat randomly, I made a goal of climbing at least 52 different peaks - an average of one per week. Just for the heck of it. I guess to have a goal where I could easily track progress. The peaks don't have to be new to me and I expect few will be, but we'll see.

Today I bagged a couple of peaks that I learned about via Homie and Jeff Valliere. Ones I hadn't ever thought about before. There are no trails anywhere on these peaks, so it was just exploring up hillsides. I found the directions and route description on summitpost.com. The route I took up Coal Creek Peak was very direct and involved lots of sustained scrambling on the upper part. It was almost tedious getting to the summit, but I was just moving slow and cautious and listening to my book and just enjoying the outdoors.

I wasn't sure I wanted to go to Crescent Mountain because of the complicated, rocky, densely-wooded terrain, but decided to go for it. I went over one  unnamed bump enroute and encountered a bit of postholing below the summit, but it wasn't bad. I descended steep, brushy terrain until I hit a dirt road at a cabin. I followed this all the way down to Coal Creek Canyon highway 72, going past a number of cabins and a big fifth-wheel that I was amazed they got up this steep road.

It was nearly three miles of running along the highway to get back to my car. I thought I'd read that it was more like a mile, but that just gave me a chance to do something other than slow hiking. It was a fun loop of nearly seven miles and 3000 vertical feet, but I'm not sure I'd recommend it to many people. You'd have be pretty into peak bagging or solitude to do these mountains.

But, I've now done 11 unique peaks for the year and I'm ahead of schedule.
Posted by Bill Wright at 1:42 PM 1 comment:

LPP: Two Down, Ten to Go 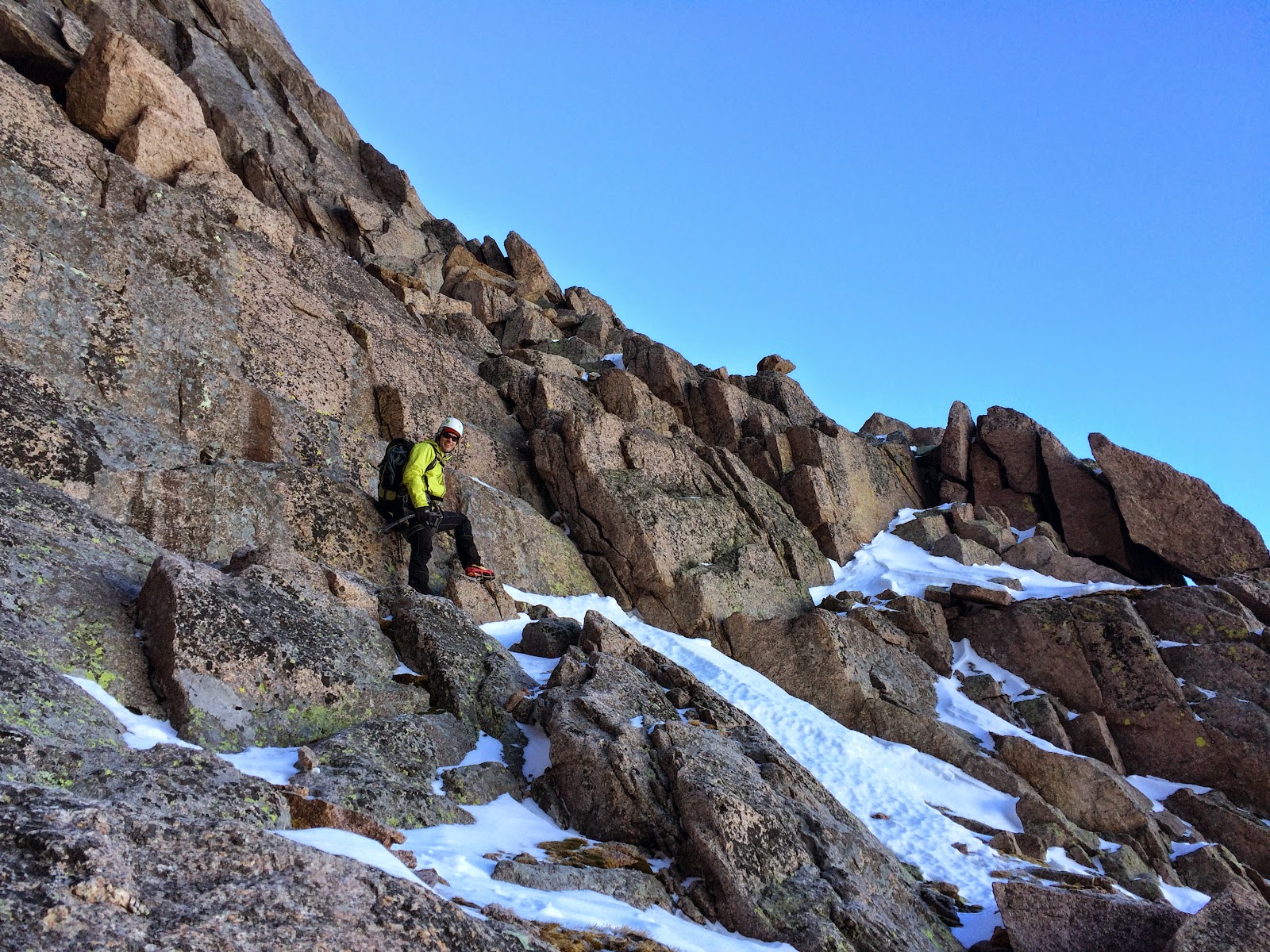 Well, I guess it is "game on" now. I wasn't fully committed to this project originally, knowing the amount of work and commitment it would take, but with two of the toughest months out of the way, I'm fully committed now. Charlie and I are really gelling as partners. We have very similar attitudes about climbing and our personalities seem very compatible. We both like to move efficiently and mostly continuously, but we take short breaks when we need to get something done. Charlie has taught me the value of this, when, in the past, I'd just keep moving and either get too damp because I didn't stop to shed a layer or bonk because I didn't stop to eat. My main contribution to the team is a vast knowledge of the peak. 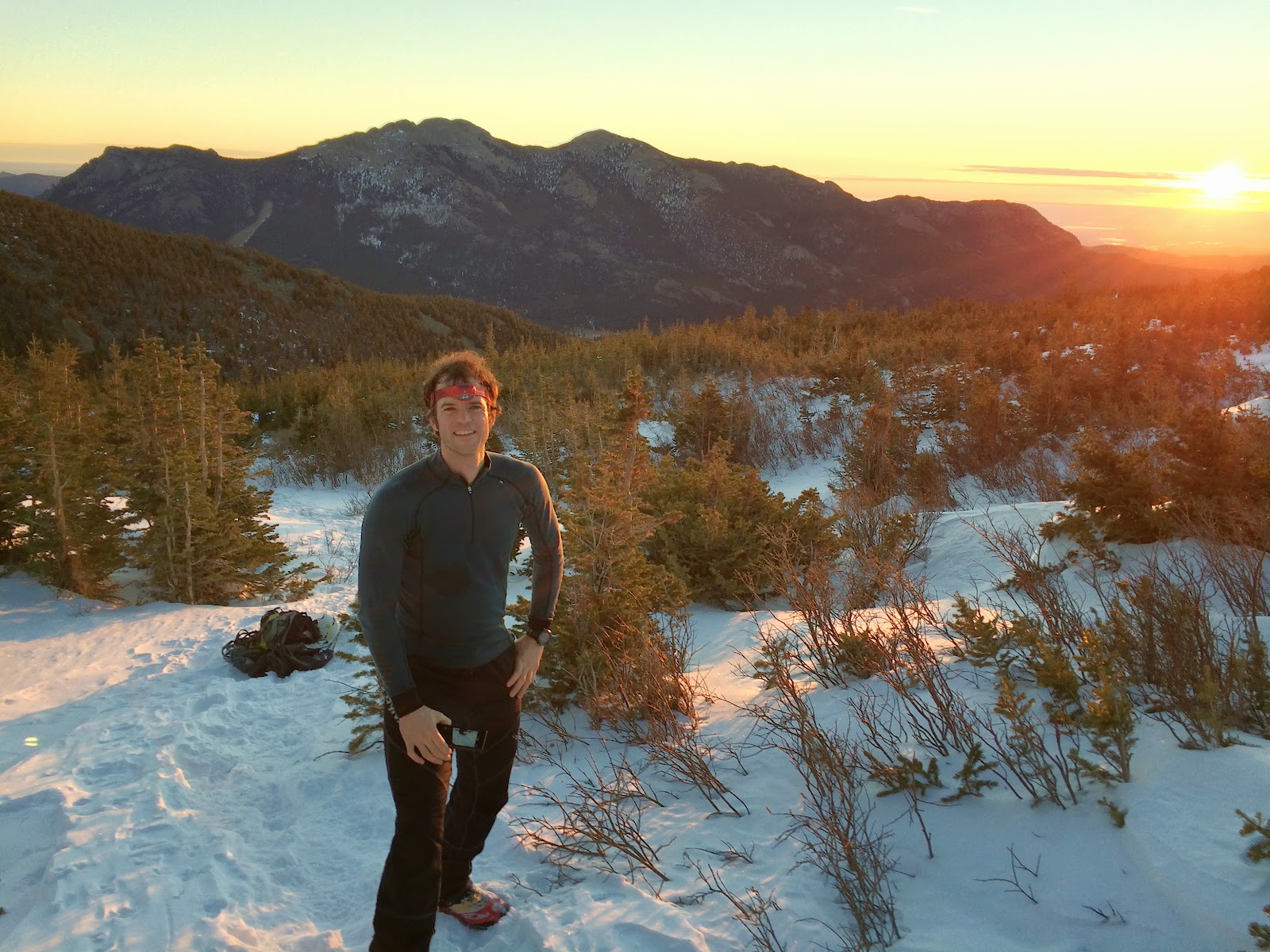 One the key changes we've made for the project is that we go when the weather is best, no matter what day that is. This is a huge change compared to the last time I did this project and I was a slave to the weekends and the fickle weather. Climbing Longs Peak in winter (or any time, really) is challenging enough without having to do it in bad weather. We got our asses kicked going for it in January with a stupid weather forecast of 35+ mph winds with gusts to 60 mph. Smarter people would have seen the folly of that attempt days before we started. The good news is that we can be taught. Today was an example of that.

Friday looked great, with sunny skies, reasonable temperatures and winds of only 10 mph down low and just 20 mph on the summit. The forecast was correct and that was coupled with great climbing/snow conditions, the perfect gear, and an ideal partner. Charlie took a bit of umbrage with me last time when I said we had near perfect conditions and partner. So, he's "ideal" this time. 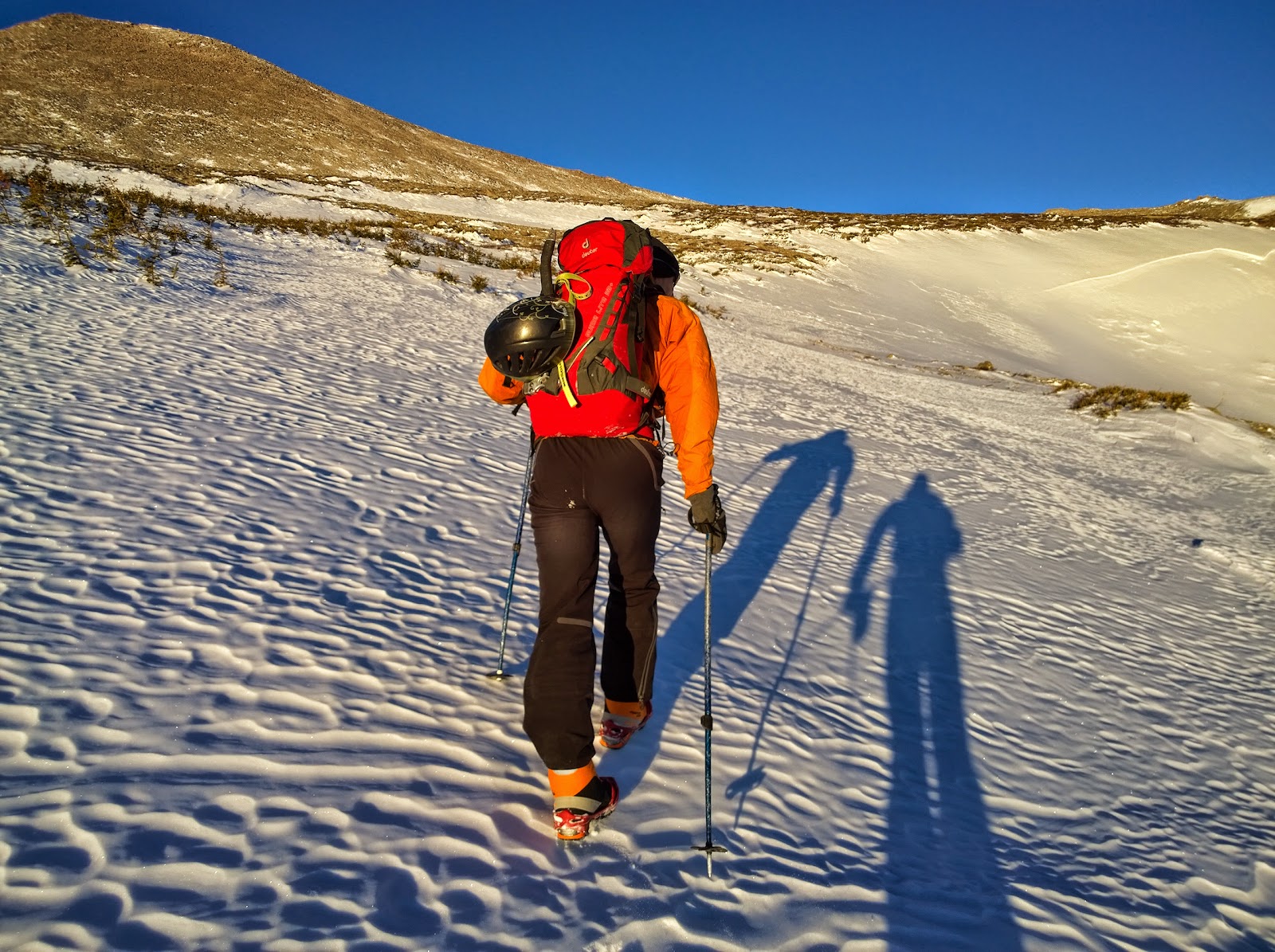 We both went in our big mountain boots because our route this time was the Northwest Gully, which is rated 5.1 or 5.2. We wanted to be able to use real crampons for the climbing section. The boots worked out great, but we never put on the crampons. We did the entire route in Kahtoola Microspikes, stretched tight over double boots! Microspikes are such a versatile tool for mountain climbing. Our original plan was to just use them to gain traction on the rock-hard trail below timberline. In a stiff mountain boot it is very difficult to hike on such terrain with some traction and crampons are a huge overkill. But the Microspikes stayed put so firmly that they served as mini-crampons and while we avoided the ice, they bit nicely into verglas-covered rock that wouldn't have been climbable in a bare boot. 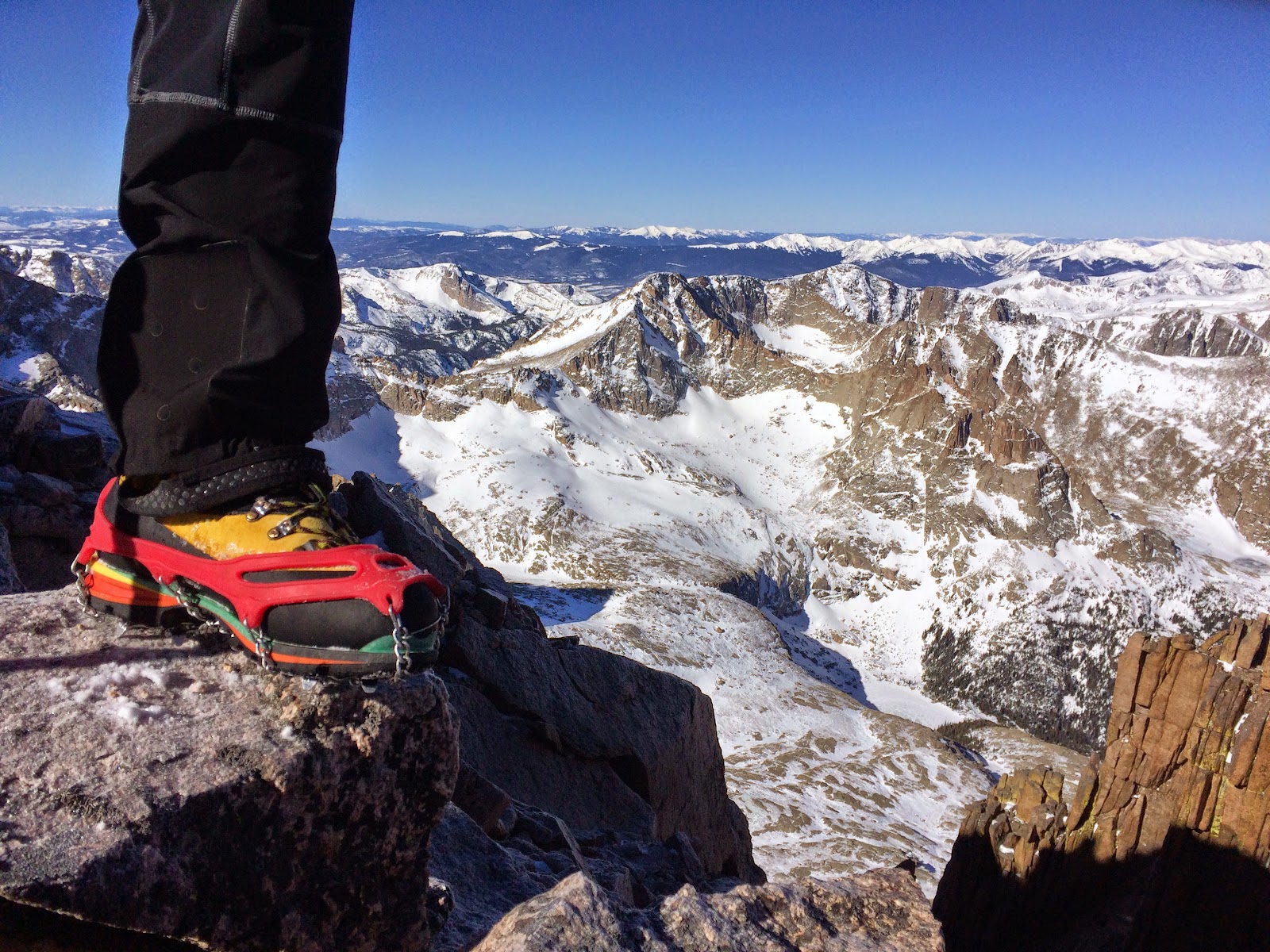 We met again in Boulder - what's become our routine: Meet at Chipotle at 5 a.m. Start hiking at 6 a.m. Get back to the car before 3 p.m. We've been rotating drivers and it was turn to take the wheel. Our packs were a bit heavier this time, as we each carried a 30-meter rope, mainly to distribute the load, but the climbing didn't require a longer rope. We tied them together for the rappel descent down the North Face.

The parking lot was disturbingly windy, but the first hour was spent below treeline and we were nicely sheltered. When we did poke our noses above the trees it was nicely calm. We cut the corner of the Longs Peak Trail, going roughly halfway between that trail and the Jim's Grove Trail and then across the flanks of Mt. Lady Washington. Here my hands got pretty cold. I was still wearing just a light pair of pile gloves and vowed to switch them at our next break, which was just below the Keyhole. By the time we got there, the wind had died again and we were in the sun. My hands were warm, but I switched to my mittens as we'd soon be heading through the Keyhole and into the shade and wind of the north side. 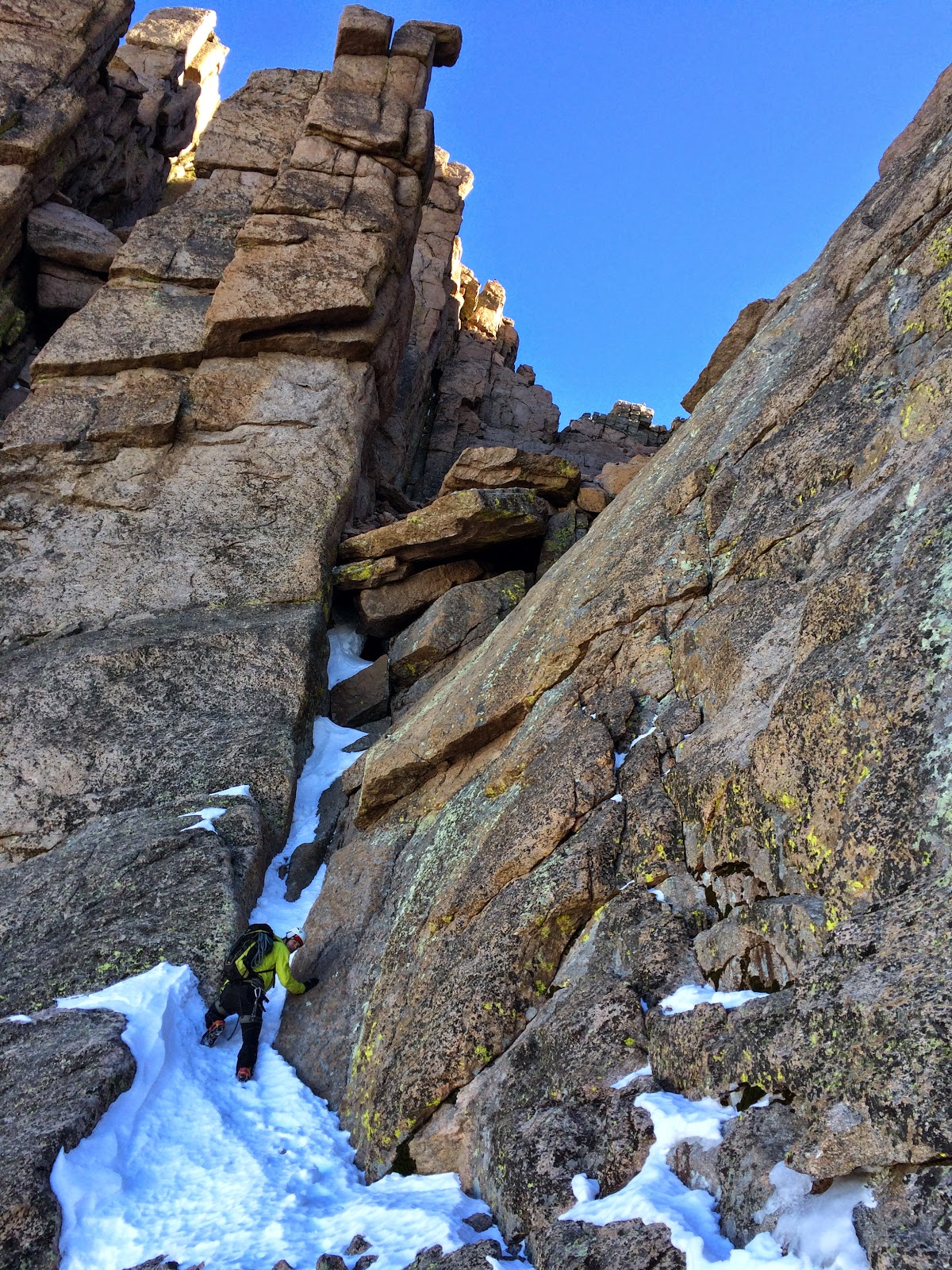 Charlie took over the lead here. He was excited for the moderate technical challenge ahead. I followed behind, grateful for his trail breaking in the few sections with deep snow. I'd been up the Northwest Gully twice before. My first time was in March of the 2008 LPP (Longs Peak Project) with Homie. The second time was when I soloed up and down four routes on Longs one winter. Thankfully, I remembered where the start was and soon we were clambering up it. There was significant patches of ice and we contemplated switching to real crampons, but were able to mostly avoid the ice and continued with our spikes. At the crux, Charlie decided to rope up, mostly because he didn't know the difficulties above and because we had carried the gear. He pulled out the rope we carried and placed a stopper for protection. We already had our harnesses and helmets on. I put him on belay and he quickly led up to the sole fixed piton, which stuck out alarmingly far. He clipped the metal ring and didn't bother to tie it off, but the climbing here isn't too bad because of a key foothold and the difficulties end soon, as one crawls under a massive, flat boulder.

The signature feature of the route is this huge boulder and the fact that the route burrows underneath it. Charlie belayed me up from under the boulder and then we had to remove our packs and squeeze on our bellies to get out the other side, pulling our packs along with us. Once on the other side of the boulder we stowed the rope and continued solo. I had thought the climbing above was easy compared to this crux, but a couple of sections above sure gave me pause and were overcome only with considerable effort. 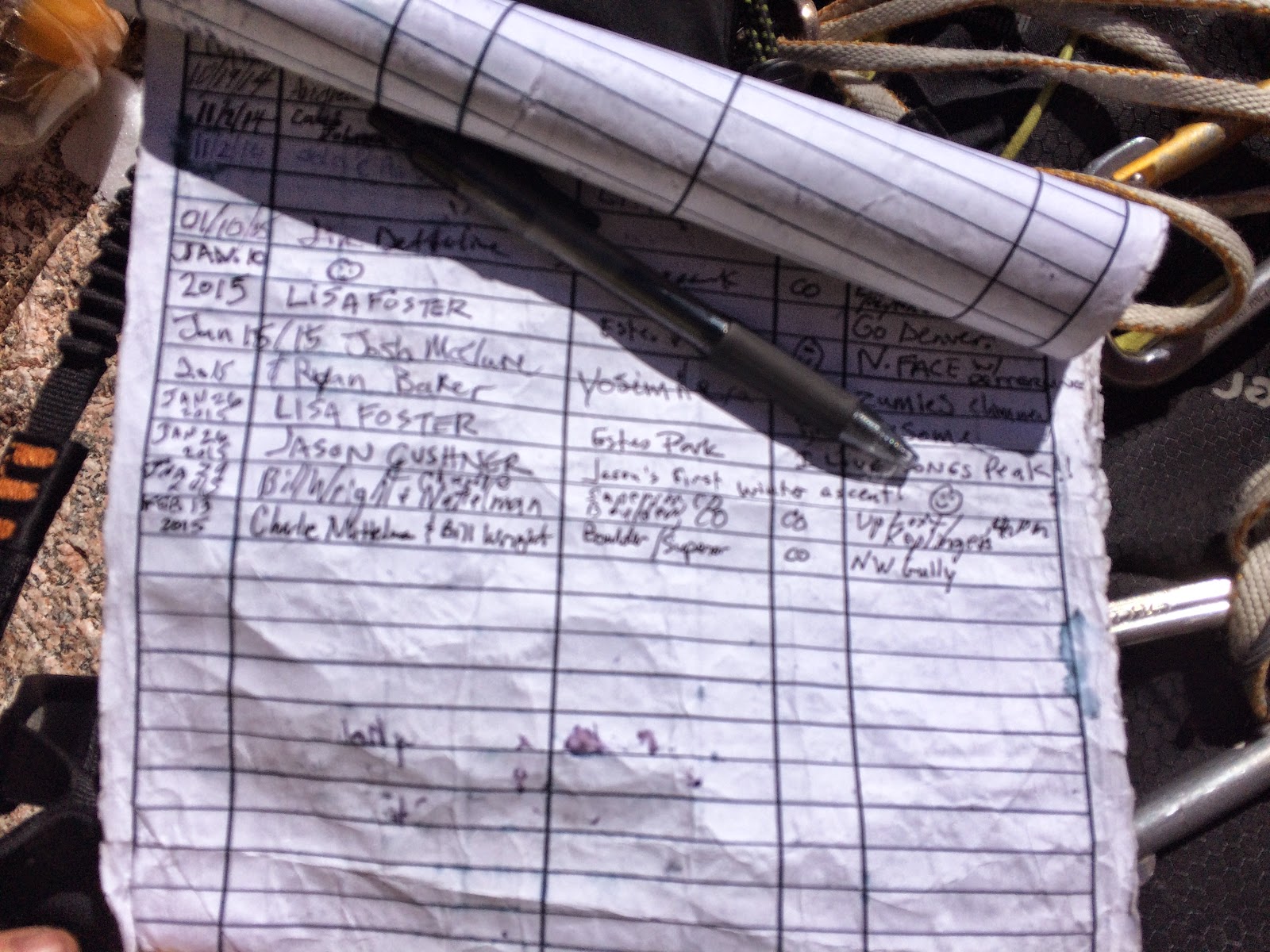 We merged with the Keyhole Ridge route and then, after a steep 40-foot corner, we emerged onto what could only be called the Northwest Ridge. To our right was the steep and featured West Face, which has a number of moderate rock climbing routes, none of which I've yet done. To our left was the dark and snowy North Face. I started to lag a bit behind Charlie here, as the 14,000-foot elevation wasn't provided the necessary oxygen.

The summit was sunny and relatively calm - our weather report had been very accurate. The views in all directions were spectacular. We were surprised and delighted to see that we had been the last climbers to summit. 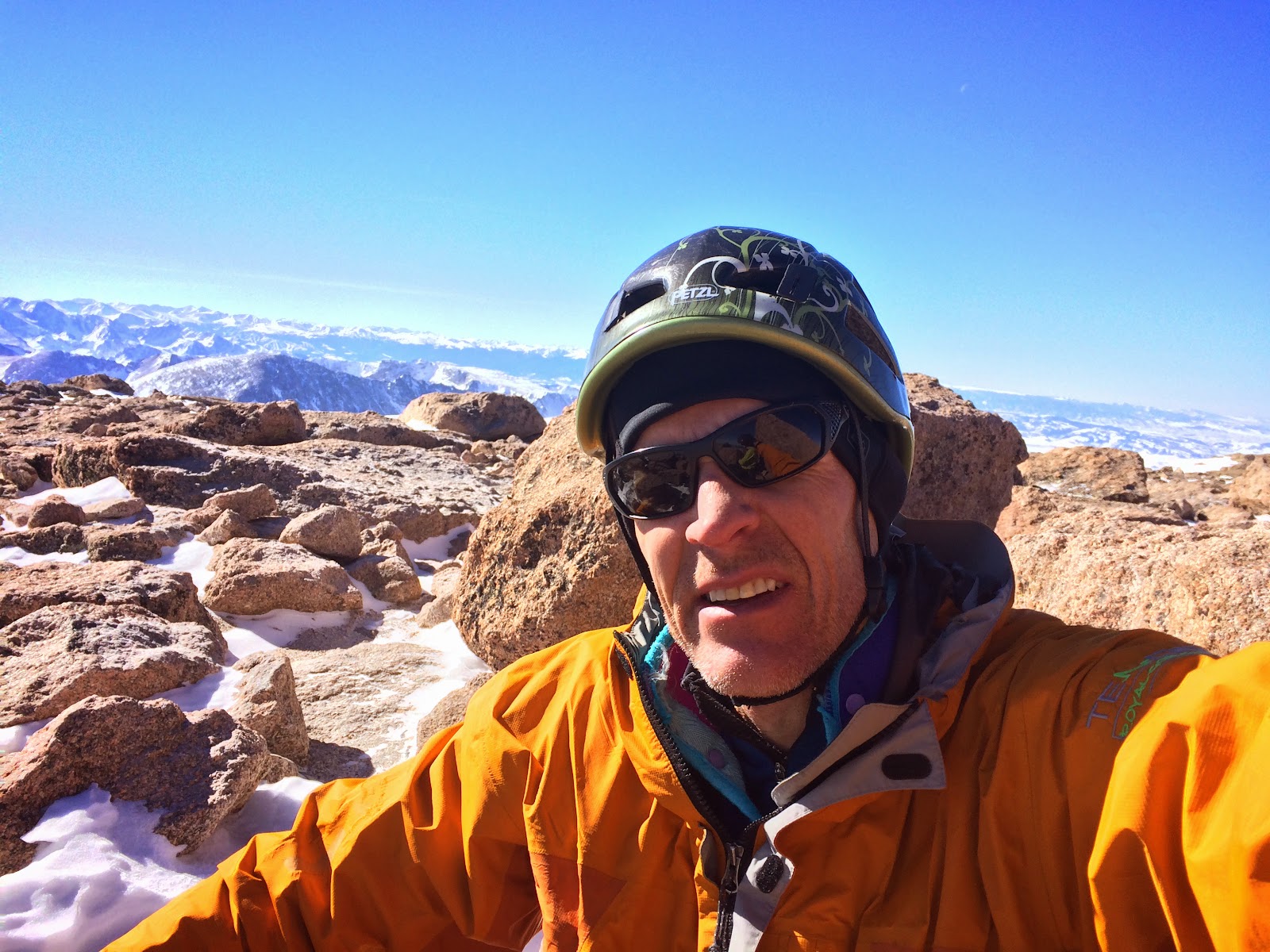 It took us 4m45m to make the top and we spent about fifteen minutes there before I led us down the North Face to the rappels. With just our spikes we were cautious and decided to rappel from the highest eyebolt down to the usual eyebolt. I went first and, having forgot my belay device, used a biner braking system. This worked well except that the second rappel didn't quite reach the snowfield below and I had to do some downclimbing. I forgot that I was using a biner brake and when the ends of the rope pulled through, both biners dropped away, never to be seen again. Stupid.

I called up to Charlie to use the final eyebolt for a third rappel anchor and he made it down to the snowfield nicely. We stowed the ropes and carefully downclimbed the 4th class climbing to the firm snowfield below. The snowfield, as always, didn't last long enough and we laboriously picked our way through endless boulders down to the Boulder Field Camp. We took another break here to eat and drink and shed some clothing. It was remarkably calm here, where is it almost universally windy. 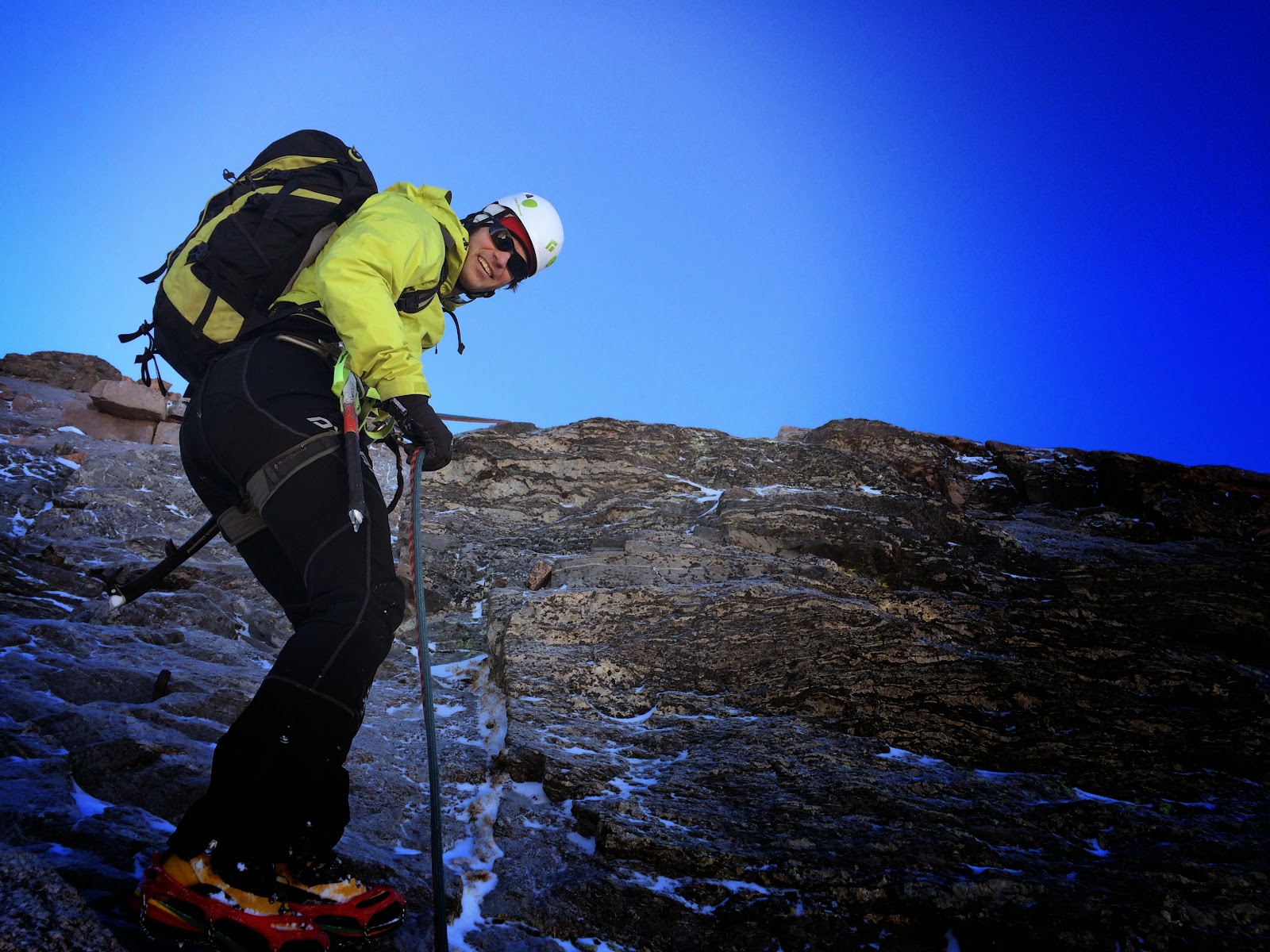 On the way out we took the Jim's Grove Trail and it went well. We saw a group of five snow white ptarmigan (can we identify all five in the photo below? The fifth is very hard to see) and further down in the woods a snow white hare. These animals are very difficult to see because of their coloring and the only way we notice them is by inadvertently walking too close to them so that they move. 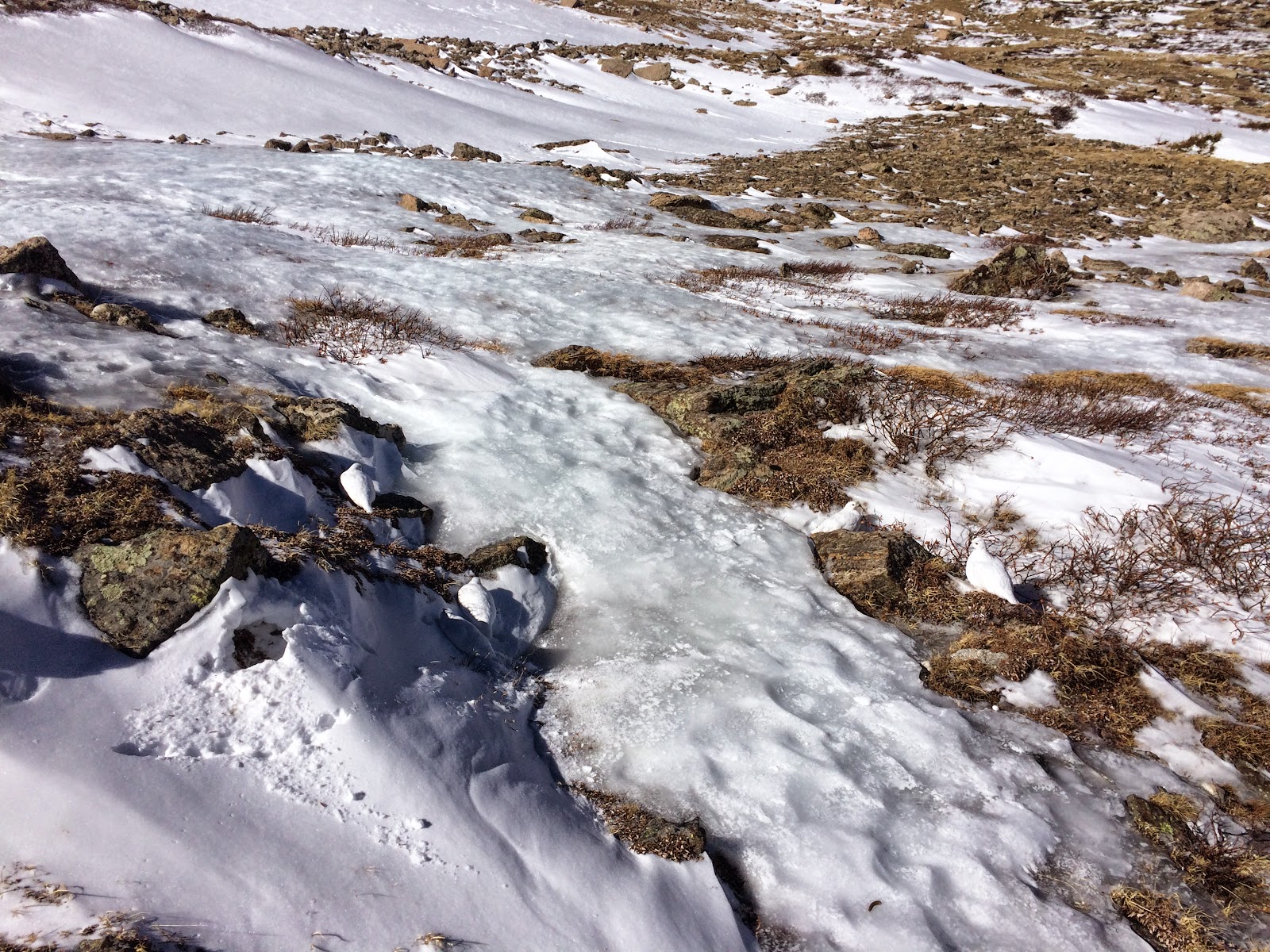 We got to the car 8m13m after leaving it. Everything had gone perfectly. While we took a number of breaks, they were all less than five minutes, save the summit stop. We're never in a hurry, but we are efficient. And good weather goes a long way up here in winter.

We've completed two winter ascents - the minimum required. We'll probably get another in March, but it will depend on the weather.
Posted by Bill Wright at 5:43 AM 1 comment: