Bagging Peaks and Ticking a Goal 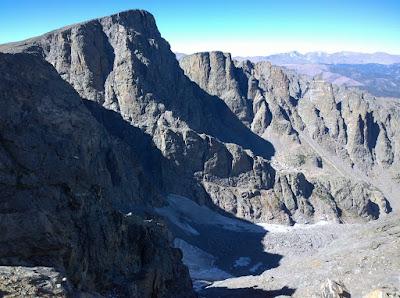 I'm very goal oriented. My goals might be modest, but I really like having projects and a ToDo list that can direct my activities throughout the year. Each January I make up a list of goals in a whole bunch of different categories. I usually don't do that well against them, as I'm overly ambitious in my planning and overly lazy in my execution. But I do it nevertheless.

One of my goals for this year was to climb 52 unique summits. These didn't (and weren't) have to be peaks I had never climbed before, I just wanted to average a new summit each week for a year. Of course, I started off way ahead of pace by bagging all the local summits: Green, Bear, South Boulder Peak, Flagstaff, and Sanitas. As you can see, my definition of summit was somewhat liberal. Any named highpoint was considered valid.

Yesterday, I completed this goal with the first summit (Half Mountain) of our Glacier Gorge Traverse. I then did nine more new summits for the year. Longs didn't count at this point since it was my tenth ascent of that peak this year. Here is a list of my totals to date. First, and most important, my partners:

I've done 128 summits this year, but many are repeats due to the Longs Peak Project and my other goal of climbing the five local peaks in each month of the year. Here is the complete peak list to date: 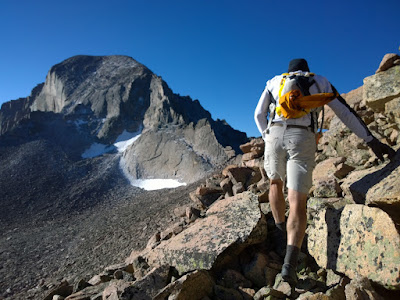 The Keyhole Ridge is a really pleasant 5.5 climb that ascends from the Keyhole directly to the summit of Longs Peak. I'd been up it three times before, twice solo. The climbing isn't very sustained, the holds are positive, and the rock is extremely good. It is steep, though, and quite exposed for about a hundred feet, so it's a bit heady to climb this unroped, onsight, which is exactly what Charlie was planning to do. Why? I think because he trusted me that it would be fine and he trusted his skills and his head. He was right on all accounts.

But it wasn't enough for Charlie to just climb Longs Peak via the Keyhole Ridge. That would have been enough for me. It's enough for most people. Just climbing Longs Peak is a considerable effort for me. But good partners make you raise your game and Charlie is the best of partners, as I've written ad nauseam.

Our plan was to do the Glacier Gorge Traverse, though recently my buddy Buzz has pointed out that his is a bit of a misnomer. I'm not sure who first used this name for this link-up of peaks. I don't think it was me, but I have been using it. Others have called it the Ten Peaks Traverse (though there are eleven named summits, but one really isn't a summit) and the Interior Park Loop. Regardless, the peaks on this traverse are Half Mountain, Storm Peak, Longs Peak, Pagoda, Chiefs Head, McHenry's, Powell, Taylor, Otis, Hallet, and Flat Top. It's 20+ miles, about eight of that on a trail. The other twelve miles are scrambling, talus, and rock climbing. I'd done this traverse once before, in the 2008, the last time I did the Longs Peak Project. I did this with Homie and we went the other direction. Then we climbed directly up the West Ridge of Pagoda, using a rope and some gear. We also descended the Keyhole Route off of Longs and didn't do the Keyhole Ridge. Oh, and back then I didn't know about Half Mountain and we just descended into the talus and woods after Storm. I wrote in that report that once was enough for such a grueling day. It had taken seven years for me to reneg on the pledge. 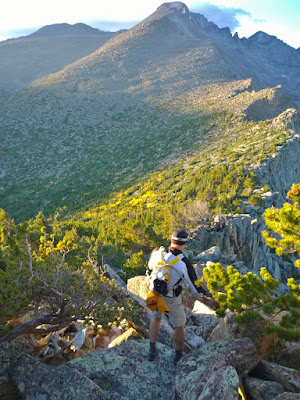 We met in Boulder at 4:30 a.m. and drove to the Bear Lake parking lot. We started hiking by headlamp at 5:40 a.m. I carried a small pack with a Gortex shell and tights strapped on the outside, though I didn't use either. I wore a long-sleeve shirt over a short-sleeve shirt, hat, and gloves. In my pack was just food and water. I carried 50 ounces of Gatorade in a bladder and 20-ounce bottle, which I never used (silly). Charlie carried over a 100 ounces of water and a bit more gear, but he's a lot stronger.

We hiked towards Glacier Gorge and then took the Longs Peak Trail at the junction. Just as it was getting light enough to see a bit, we broke directly south, going cross-country through the woods and talus towards the summit of Half Mountain. This went remarkably well, with Charlie picking out a great route. We topped our first peak in 87 minutes. The traverse to Storm was long, windy, and a bit chilly. We finally hit the summit after 88 more minutes. We had about 13.5 hours from the start until it got dark again and our goal was to not use the headlamps again. This traverse is fun for a numbers guy like myself, in that I can track the splits between each summit. It also gives me smaller goals to concentrate on, instead of the immensity of the entire outing.

We descended to the Keyhole and started up the Keyhole Ridge. The main reason for doing the traverse in this direction was to ensure that we got Longs Peak. Doing Longs Peak as the ninth peak would add risk due to weather and fatigue (for me anyway). Plus, I've been battled an ankle injured that severely limited me while descending any terrain that wasn't completely smooth. I was worried that I'd turn the ankle and end my day. If I did that, I wanted Longs behind me, though getting back to the road for any part of this traverse would have a huge problem. For this reason I took things very slow and cautious on all descents. Charlie followed behind me on these and never spoke a word of frustration at my pace, probably because he had no frustration. He's a patient guy. 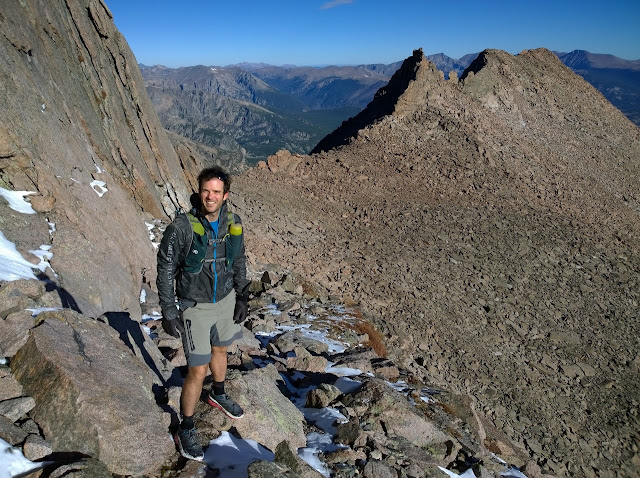 The Keyhole Ridge was mostly in good shape, but some snow and a bit of ice required us to focus. Actually, whenever you're soloing something this steep, you need to really be solid and moved very deliberately and cautiously, testing each hold no matter how solid they work. There were a number of sections on this traverse that were "no fall" terrain and this was one of them. Charlie impressed me by doing the entire traverse in his Hokas. Damn... I did the entire traverse in my La Sportiva Mix scrambling shoes. They provided nice security on the technical sections, but my feet were quite sore from the lack of sole protection by the end of the day. I'd have happily switched shoes with Charlie for the final trail descent, but not here. 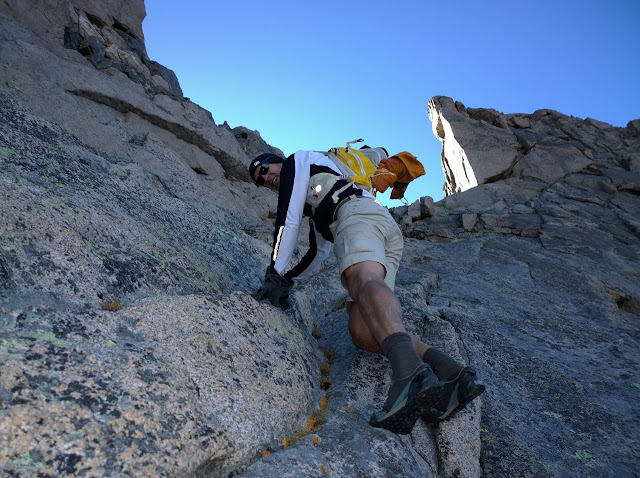 It took us 72 minutes to get from Storm to the summit of Longs Peak. Well into September, the massive crowds are gone from this mountain and we shared the summit with about 15 other climbers. But we didn't share it for long. I dumped out some pebbles from my shoe and we put on some sunscreen and then we headed down the Homestretch bound for Pagoda. We didn't sign a single summit register all day and I only sat down on two summits (Longs and Chiefs Head), each for about a minute. On most summits I didn't even stop. Charlie did, to refill his water bottle from a reservoir in his pack, but he easily caught me. 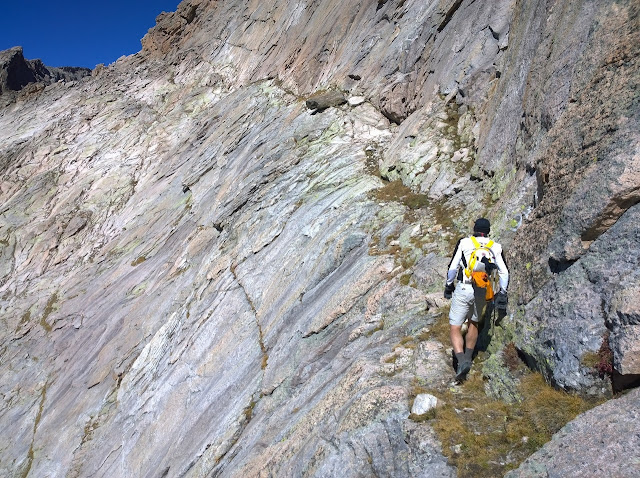 We were on Pagoda 53 minutes later and then headed down the crux of the route: the West Ridge of Pagoda. As I said before, I'd climbed up this with Homie seven years ago and I descended this with Alex Honnold in 2012. I didn't like the north-side, overhanging traverse that we did that day and with the snow and ice on the north side on this day, I had no thoughts of repeating that. Instead, I was hoping to do the ledge traverse that Eric Winkelman had told me about back before I did this the first time. I got the beta from Buzz, Peter, Anton, and others, but we did had some trouble locating the correct downclimb (5.5 or so) down to the ledge. Once we finally figured it out, we followed the ledge down and left, the opposite way we wanted to go, until we could downclimb again to a smaller ledge that led back toward the notch between Pagoda and Chiefs Head. It took us about 90 minutes to get to this summit and then another 90 minutes of tedious, tiring, loose talus to get to the summit of McHenry's. I viewed this traverse as the crux for my ankle and was very glad to have it behind me. 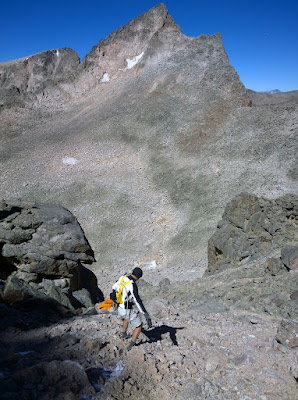 There was one last "no fall" section, which was the downclimb into the notch between McHenry's and Powell. This is quite steep, but the rock, again, is very good and featured just enough. This downclimb was a lot longer than I remember it. It seemed to be at least two hundred feet of steep going. Once at the saddle, it was relatively quick to gain Powell's summit. We took 49 minutes between the two peaks.

The rest of the traverse was class 2, though there were nine miles to go and still plenty of talus. We got to Taylor in 49 minutes, Otis in 54 minutes, Hallet in 42 minutes, and Flat Top in 20 minutes. All we had left was 4.5 miles of hiking down a good trail.

I had run out of water in my bladder before McHenry's summit and, besides one sip from Charlie on that summit, never drank again. Why? Because I'm an idiot. I didn't want to pull the water bottle out of my pack and I was saving it to drink on Flat Top to aid my descent. But once we got there, Charlie had to say, "Looks like we'll finish just over 13 hours." Phrases like that don't go unaddressed by me. I never was that fast and I'm pretty slow now and I had difficulty going downhill at that point, but still I can't ignore "the tyranny of the clock."  I started to move quicker. It wasn't a run, that's for sure. It was more than a walk. Not really a shuffle or a trot. I called it a "hurry." It wasn't pretty. So much, so that when we passed the two or three parties we saw on the descent, I lapsed back into a hike for fear that they'd assume I was a special-needs hiker and encourage me with "Good job! You can do it!" Ah, vanity. I also dropped and lost my hat on this descent. Bummer. 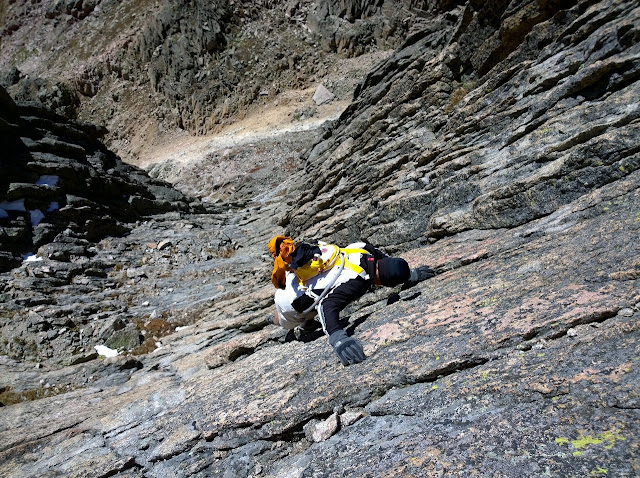 But we made it. Not only did we get our September ascent done and complete three quarters of the Longs Peak Project, but we broke thirteen hours: 12:55. 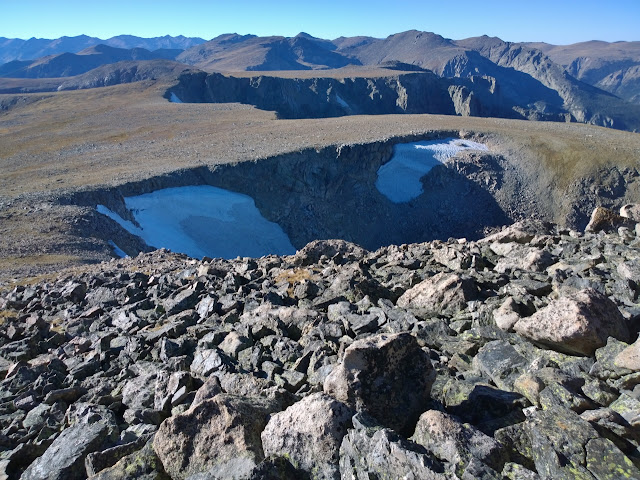