Right Dovetail - Month 11 of the LPP

The Right Dovetail is very cool mixed route that ascends an impressive wall to the left of the Keyhole Ridge. It was our objective for month eleven of the Longs Peak Project. When I left my house the temperate was just 23 degrees. With the summit 9000 feet higher, I wondered if this was a wise choice - going for such a technical route in such cold conditions.

Charlie and I met in north Boulder, as usual, drove to the trailhead. There is some construction going on here, but I doubt they'll make much progress until Spring. They even have the pit toilets roped off and locked. That seems dumb. I'd love to hear the thinking behind that.

I was dismayed with the weight of my pack. Actually, that isn't quite true. In my pack was a light harness, a pretty complete rack, crampons, two tools, 60-ounces of liquid, some food, spare clothes, a headlamp, and a SPOT. It wasn't that it was so heavy, it was that it felt so heavy. Trudging up the trail I wondered how the technical climbing would go. 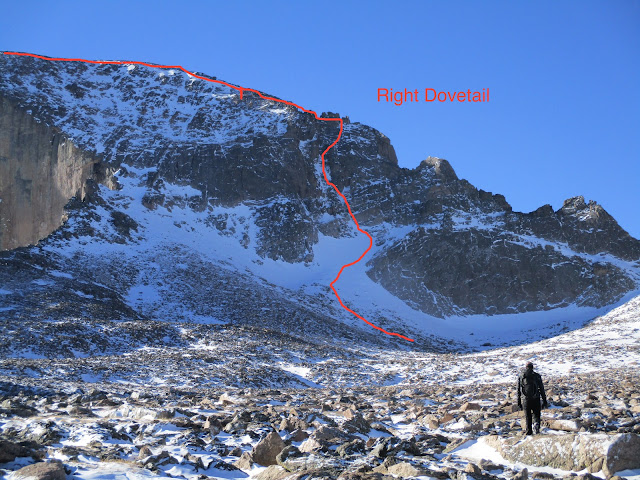 We took the first shortcut and then just stuck to the trail, as none of the cuts were tracked. I was moving slower than normal. It was my first time in my double boots since our May triple couloir outing and I felt out of shape and clumsy. Above the Chasm Cut-off, traversing right along the slopes of Mt. Lady Washington on the trail, we came across three separate parties.

The first, a couple, stepped to the side with the woman saying she was tired. So was I. I asked where they going and the guy answered, “We’re not sure, but hoping to check out Alexander’s Chimney.” “Oh, that’s cool,” I said, but you’re not heading that way. You need to take the trail towards Chasm Lake and eastern cirque.” They thanked me and turned around. I doubt they even made the base of the route.
The second couple was planning to climb Mt. Lady Washington, but were continuing along the trail, headed to the Boulder Field. I told them that if they really wanted to make the summit, they should just start heading up directly. There is somewhat of a climber’s trail that starts at Chasm Cut-off. Eventually all routes become boulder scrambling, but there is no need to hike away from the summit on a trail that barely gaining any elevation.

The third team was a couple of guys who had never climbed Longs Peak before. This is a bold move. Not as bold as those two Polish climbers trying D7 in winter for their first Longs ascent, but bold nonetheless. They were going to either the Keyhole or the North Face. I asked if they had ropes and gear and since they did, I recommend the North Face to them, but they were reluctant, despite having listed it as one of their options. They quizzed me about descending via Clark’s Arrow and the Loft since the leader had climbed Meeker before and knew the way down from there. These guys had been breaking trail, but we took over, or rather Charlie did. They quickly fell far behind and something told me they weren’t mentally committed. I predicted they’d get to the Keyhole, take one look at the shaded, snow-covered traverse and turn around. We saw them in the parking lot when got down, and that’s exactly what happened. They asked us, “What’s the trick with the Boulder Field?” Indeed.

There is quite a bit of snow up there, especially for early November, and it is completely unconsolidated. To move in the Boulder Field, you had to hop from boulder to boulder. Any time you stepped in the snow, you plunged way down. This made for a tiring traverse, mentally and physically. We took a short break at the campsites and then continued boulder hopping towards the initial couloir. We geared up just before entering the shade of the north-facing wall and then started the most frustrating and tiring part of the entire climb.

Charlie led upwards, postholing to his knees most of the time and sometimes deeper, but it was worse than that, because even then nothing was solid beneath your feet. I followed in nearly as tiring conditions.  For the next 300 or 400 vertical feet, we waded through the worst snow of the year, for us anyway. We roped up when the couloir pinched down to about ten feet wide and became bare ice. Charlie led upwards and found the ice incredibly hard and very brittle. Ice chunks and shards rained down, fortunately just to my right. Charlie disappeared from my view, as the couloir constricted further and angled back to the left, but the rope pulled steadily through my belay device. After 190 feet he called down, “Off belay.”
I started up and continued an incredible sequence of whines that started with massive foot discomfort. On the approach my feet were just killing me and I didn't know why. My boots are still relatively new and I really should get some custom fitted liners, as I was in some serious discomfort. As I started up this first pitch it was cold hands, but I'm whine about cold feet on the second pitch. I forgot to bring eye protection at all and would have whined about that as well, but we seemed to either be in the shade or have our backs to the sun all the time. That's the advantage of heading west at the start of the day and returning to the east.

The higher I got the colder my hands became. After I pulled out Charlie’s sole screw and then had to ball up my hands to try and get some feeling back. Further up I stemmed up a steep rock corner. I climbed as fast as I could so that I could finish the pitch and recover my hands before they went too far gone. I wouldn’t have climbed this way without a nice tight belay from Charlie.

At the belay I went through the screaming barfies. I had to defer the next lead to Charlie, as my hands were barely functional to belay. I put on my down mitts with big chemical heaters in each mitt and before Charlie was halfway up the next pitch my hands were back in business. This next pitch started with some snow and then some very nice, plastic ice. Why was this ice so much better than the ice below? Because it was insulated by an 8-inch layer of snow. It didn’t bother me that I could see my frontpoints or my picks, as they felt so solid. The second half of the pitch was all rock climbing and most of it was easy, but there was one dicey move where I had my crampons on a sloping foothold.
With my hands back in working order, I took the next lead, which was entirely a rock pitch. I stowed my axes, but kept my crampons on, as there was still plenty of on the rock. I moved up steadily and the climbing got easier. I hit the top of the wall, where our route merges with the Keyhole Ridge and set up a belay. Charlie followed and led the traverse over to the notch, where we grateful felt the sun’s rays and unroped.

The last few hundred vertical feet to the top seemed especially difficult. I had to stop to catch my breath a number of times and so relieved when the angle finally eased. We made the summit just a couple minutes under seven hours. Despite my fatigue we didn’t stay but a couple of minutes on top. The descent to the rappels was tedious and tiring as we once again fought deep unconsolidated snow. More deep snow was below the rappel and I wondered if it was in danger of sliding. If it did slide, it would slide down to rock, as this was one completely loose layer. We careful worked down the snow past the fourth-class sections and then I sat down and glissaded as far as I could. I didn’t make it all the way down to the rocks due to the angle easing and the soft snow. We then started the endless boulder hopping once again, broken by a short break back at the campsites.
We stuck to the trail down to treeline and then took some of the shortcuts, arriving back at the car after ten hours and twenty minutes. This was a tough ascent, especially for me, but even Charlie was tired back at the trailhead. It’s been quite a journey, but we’re now one step, one ascent away from completing the Longs Peak Project. For our last ascent we chose Keplinger’s Couloir from the Wild Basin Trailhead. This is the longest route up Longs, with the most vertical gain - 6000 feet and it will be in the month with the least amount of daylight. It also involves a mile-long trail-less, bushwhack through dense forest and big boulders. We’re going to invite all our strongmen friends to join us. You might think, “Who’s going to be interested in that?” but if you did, then you don’t know our friends...

Posted by Bill Wright at 6:25 PM No comments: