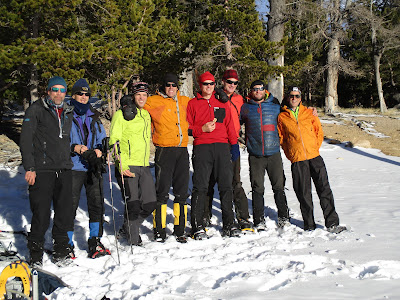 This is probably going to be sappy. Move on if that bothers you.

I passed Thanksgiving with my wonderful extended family down in Mexico and around our massive dining table we went, each saying what we're thankful for. We're always thankful for our wives, kids, brothers, sisters, parents, but this year I also brought up my friends. I am so deeply thankful for the friends I have and am a bit perplexed why I have so many unbelievable people by my side. I know I don't deserve it and I try never to take it for granted.

For our twelfth and final month of the LPP, Charlie and I chose to do Keplinger's Couloir. This was the route of the first ascent of Longs Peak and the route I used when I did the LPP in 2008. It also starts from the Wild Basin Trailhead, the lowest trailhead for Longs, and hence has the longest approach and the most vertical gain. Why such a hard finishing route? To add weight to the LPP. I think the LPP requires at least one ascent from the three major trailheads of Longs Peak, Glacier Gorge, and Wild Basin. And since I'm making the rules... 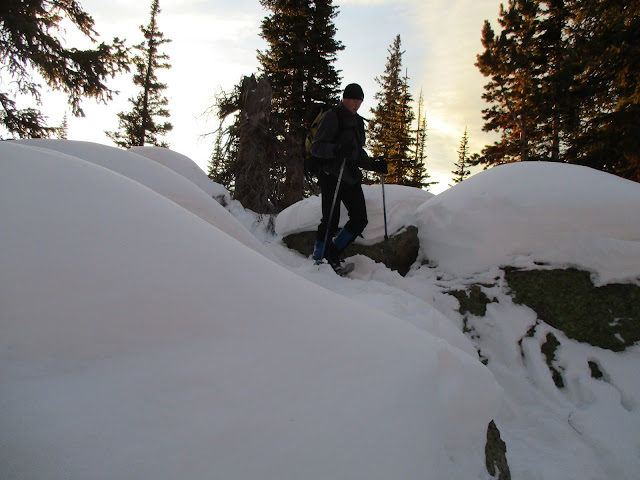 Confident that we'd succeed, Charlie and I sent out an open invitation to the Satan's Minions Scrambling Club. This is a club I founded with Homie, Mark Oveson, and Trashman to scramble and sometimes race up the Flatirons. It seems to have evolved into a vehicle for meeting elite climbers and adventurers, and a number of them joined in for this climb. Peter Bakwin, legendary ultra-runner and man who ran the Rock Hard, Hard Rock (look it up - it will blow your mind), did most of the work in the couloir itself. Jason "there's nothing I can't do" Antin, whose list of accomplishments is so long I hesitate to even list a few, but he's done the Leadman, second team to complete the complete Elks Traverse, Nose-in-a-day, climbing in Greenland, etc. Martin Le Roux joined me years ago to do a one-day winter ascent of Mt. Alice. He's climbed big mountains all over, including what may be the biggest mountain on earth: Mt. Logan.  Homie is, well, if you don't know Homie, you likely aren't reading this blog. When it comes to Colorado 14ers, especially in winter, he's one of the best on the planet. John Ortega has been a ridiculously fast trail runner with more than a few big victories. Stuart Paul is on his way to mastering every facet of climbing. 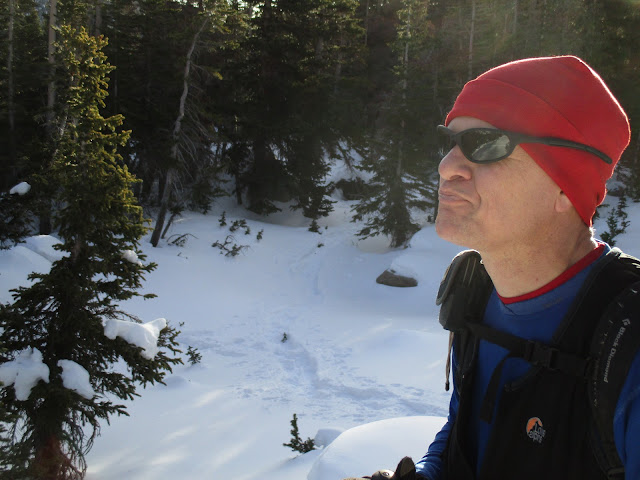 But of all these great partners, one still stands out, as the most easy going, modest strongman of them all: Charlie. I might have cheated and tainted my ascent of Longs this day by following in the footsteps of all these great guys, but that's okay, because I followed in Charlie's footsteps for twelve months. There is no way I'd have done this without Charlie. The real accomplishment is that Charlie did it with me! He'd have been faster with most any other Minion. I thank him for his patience and incredible camaraderie. I'm truly blessed. 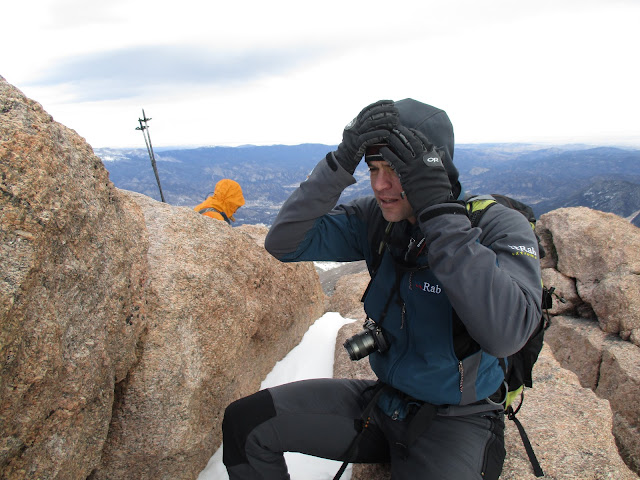 My son Derek also was excited to join us and so it was nine of us that left the Sandbeach Lake Trailhead at 4:40 a.m. We went for about a mile and a half before strapping on our snowshoes. It took us two hours to get into the lake. Derek had already hurled, mostly from anxiety. This was an intimidating group for anyone, but especially so for a 17-year-old with no winter mountaineering experience in hand-me-down boots he'd never worn before and no training since tennis season ended. It turns out even for a young, athletic, tough kid, that's too many strikes against you. It was silly of me to ask him, but I love adventuring with him and he was so enthusiastic about it that I failed to think it through. Seven years ago when I did this with two other very fit, very experienced partners, neither of them made it. 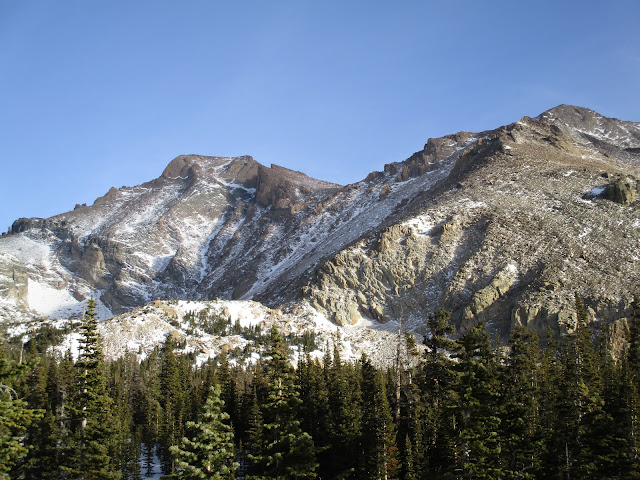 Despite foot and knee pain and lagging well off the back, he wouldn't quit. Ninety minutes above the lake I had to turn him around. I felt terrible doing it, but he not only wouldn't make the summit, but I wouldn't want to leave him as we entered much more difficult and technical terrain and therefore I wouldn't make the summit. I had already thought about coming back the next weekend, but what about Charlie? I'm sure he'd just do it again with me, but... I put myself in a terrible, stressful position and then I turned my son around. He apologized to me! I asked him to come and I encouraged him to come because he seems a better version of me in every way. And he is, when he's fit. I just thought he was even without training. He promised me to be very careful on the way out, alone, and I turned with tears in my eyes to catch up to the rest of the team. When I told Homie, the first thing he said was, "You want me to go down with him?" The least worthy person in this group was me... Jason made the same offer when we caught the rest of the group. To offer to do such a thing after arising at 2 a.m. and toiling uphill for 4+ hours and finally below the climb, shows real character and deep friendship. I declined their offers, as I was confident Derek would be careful, he had a track to follow, and he'd meet Sheri and Kristen on their way into the lake. I also knew Derek would feel worse if someone else turned around with him. I had to show Derek I believed in him to descend solo. 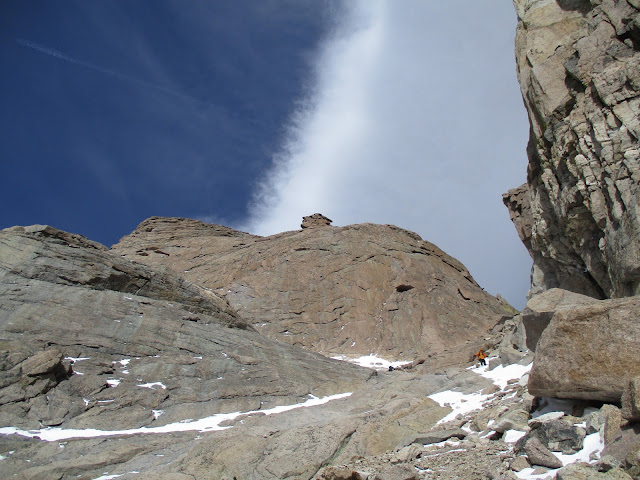 Charlie and Jason did a masterful job of trail breaking, at an incredible pace over difficult ground. My hat is off to guys this strong. We finally arrived at the base of the interminable couloir and left our snowshoes behind. The team spread out as we all entered the pain cave, ascending difficult, frustrating rock, then loose snow, and finally hard snow, where we donned crampons and could finally move upwards efficiently. I'd push myself to go a hundred steps before bending over and taking 15 long breaths before I could move again. Near the top it was hard to go 25 steps. Charlie waited for me at the start of the traverse over to the Homestretch and I just followed in his and Peter's footsteps. A couple hundred feet before the top, Peter stepped aside and let Charlie and I finish together. That was cool. 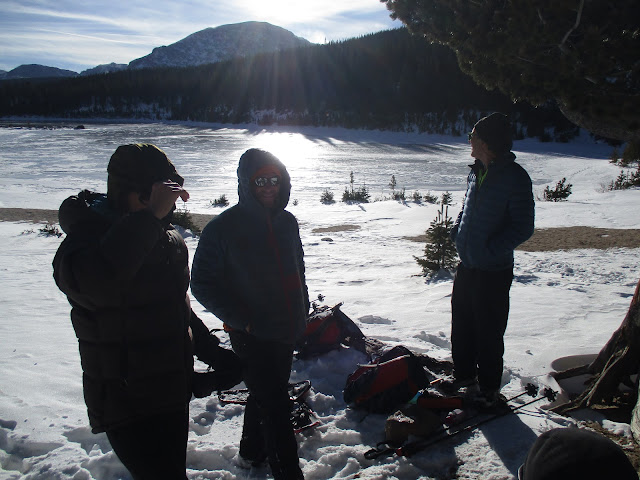 On the summit, we were whipped by strong winds. We stayed just ten minutes and only had time for me to dig out my goggles and down twenty ounces of badly needed liquids. The three of us were just starting our descent when Jason and Homie reached the summit. Five minutes further down was John Ortega. Another five was Martin and another five was Stuart. All made the summit.

The three of us descended to the bottom of the couloir with heel plunging and a touch of dicey glissading. We took a break here to change clothes, eat and drink, and Jason caught us. We continued as a sub-group of four back to Sandbeach Lake where I was hoping to meet Sheri and Kirsten. I thought the odds would be no better than 50% because we were a bit later than planned and I thought they'd get cold waiting. They also had no floatation and I wasn't sure they'd make it in there.  Sure enough, they were there with badly needed liquids and greatly appreciated brownies! 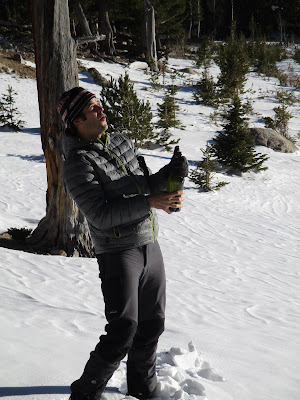 Within forty minutes we were back in one big group and finishing off the champagne that Charlie had carried in for the celebration. After some group photos we plodded out the long 4.5 miles miles back to the car, doing the last ten minutes in the dark, but not turning on our headlamps so that Homie's prognostication of not needing them would be right. We got there just under 13 hours after starting.

While the Longs Peak Project might be a silly, trivial pursuit, it is our pursuit. While it also might not be a particularly challenging accomplishment, it was for me. I believe that Charlie and I are the only two who have completed it. Yes, that is largely because only about a handful of people have even tried. But that's cool nonetheless. What will I do next...? I guess that depends on which strongman I can convince to partner up with me. I'm trying to be pro-active about this and I'm grooming and training a new strongman now: Derek. 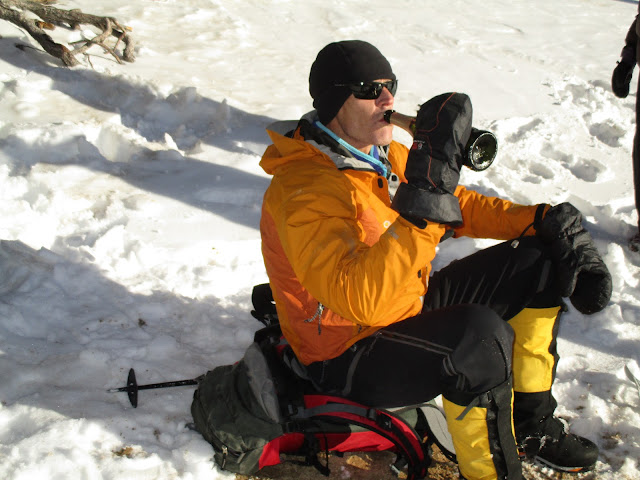