Climbing a Little Big Wall in the Flatirons 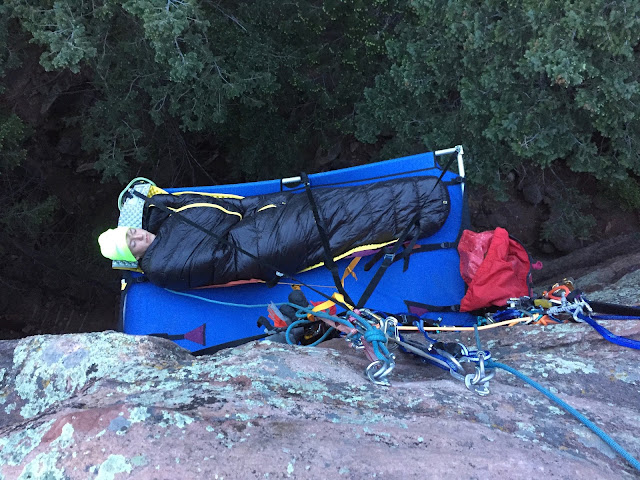 Not many Boulder climbers, when asked, would be able to name any local "big walls." None that weren't delusional, anyway. But for the creatively deranged, there can be big walls anywhere. Or at least Little Big Walls.

When Derek was ten years old we climbed to the top of the Maiden and slept up there. I figured it was time for another Flatirons bivy. Plus, we're heading to El Cap in ten days and will need to set up our portaledge 1000 feet off the ground and...we've never set up the ledge on the side of a cliff before. Might be a good idea to try it once before getting up that high.

I scoped out the backside of Der Zerkle as a practice bivy site on Tuesday morning with my buddy Danny. We climbed "What If You're Not?", a 5.7 sport route and the two-bolt anchor at the top looked good to me. Wednesday, after dinner, Derek and I headed up with huge loads. We took our El Cap gear, which meant a 70-meter lead line, a 60-meter haul line, rack, two pads, two sleeping bags, food, water, clothes, headlamps, books, etc. We had about everything we'll take on El Cap, except the rack will be much larger and we'll have more food and water. 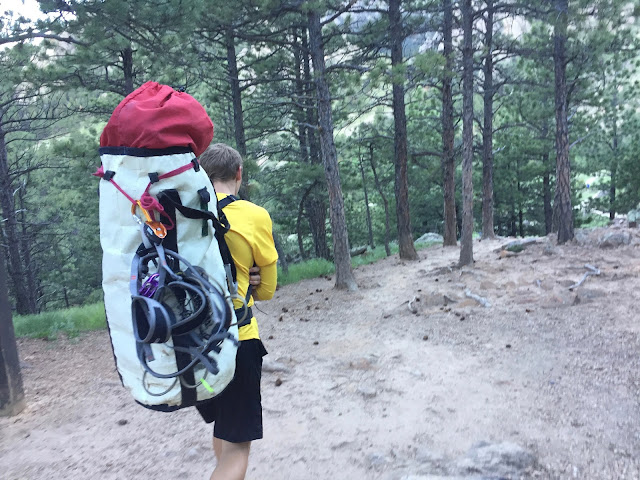 We didn't start hiking until 7 p.m., which was a bit late. We saw Minion Sara belaying some dude on The Shaft and said "Hi" as we went by. At the base of the route, we quickly geared up, cognizant of the fading light. Derek buzzed up the pitch and soon had the rope fixed. I jugged and he hauled. We then pulled out the ledge and, somewhat remarkably, set it up without much trouble. We did have our lines twisted a bit, but didn't bother to fix them and they weren't a problem. When we weighted the ledge I immediately loved it - so much better than hanging in a harness! But Derek legs started shaking and it vibrated the entire ledge. I asked if he was afraid and he said, "No, but my legs just know how unnatural this is and they won't stop shaking." This was pretty funny because he face and voice seemed completely relaxed. I got a bit concerned that it would last all night, but after maybe ten or fifteen minutes it stopped. 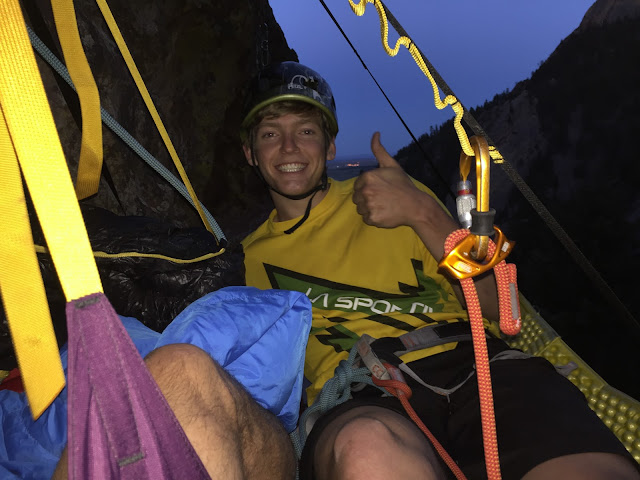 We got out the bags and Derek's pad. I didn't bother with a pad, thinking I'd be fine. I was, pretty much, but got a bit cold in the night when I just had the sleeping bag over the top of me. I needed to be completely in it. Quarters are a bit tight on this ledge, but we managed. Derek was on the outside, just by chance and seemed fine with it. 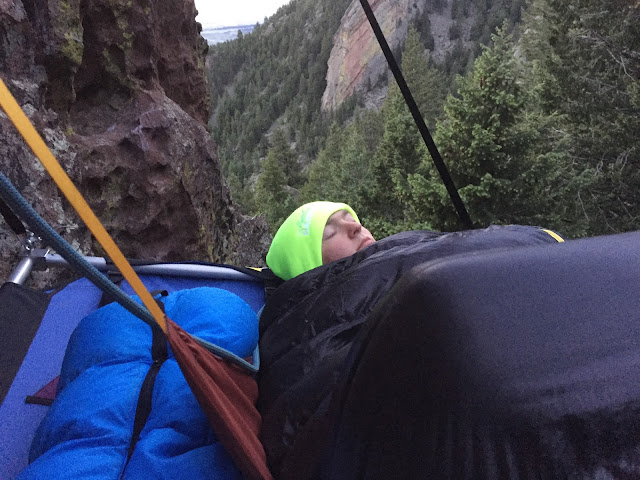 We ate a tiny bit of our food and Derek had some water. I was too afraid to drink anything because peeing was going to be an issue. We didn't want to just pee off the ledge because our ropes hung below us and I left my pack at the base. Plus, these are sport routes underneath us and I didn't want to pee on them. We should have brought a pee bottle and will take one up El Cap. 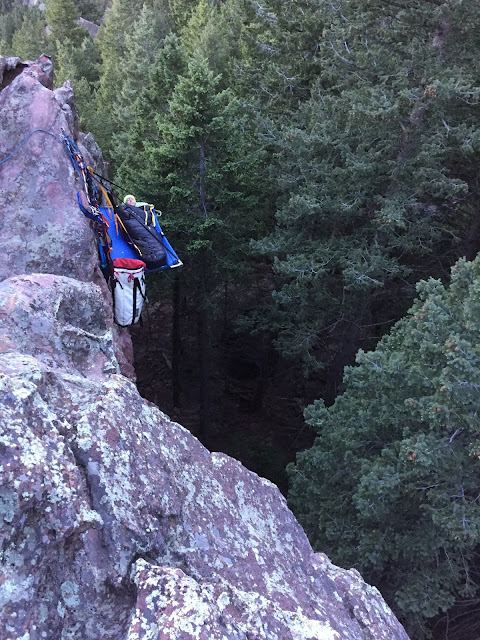 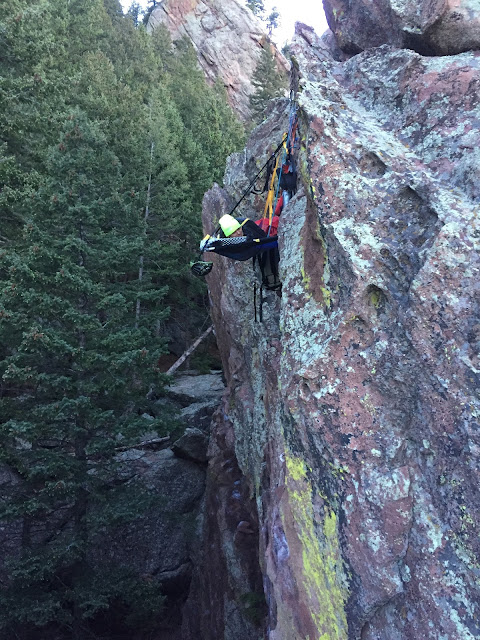 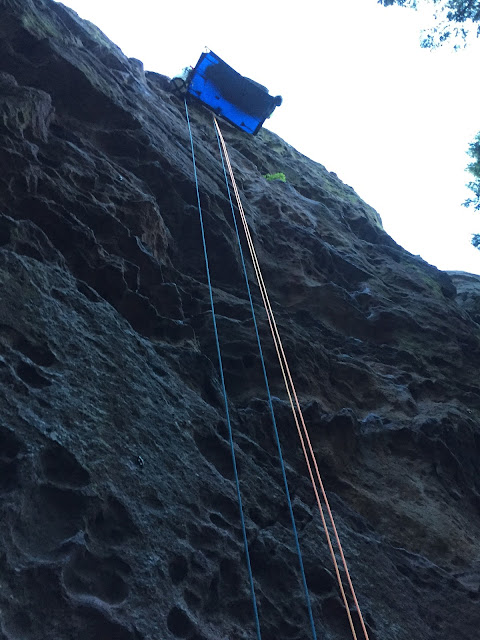 We didn't make it through the night without peeing. At 1:30 a.m. I got a bit cold and put on a hat and a jacket (I was just in a short-sleeved shirt and shorts). I had to pee, but was hoping I could last another four hours. I went what I thought was a pretty long time and checked the watch again, hoping to see at least 2:30. My watch read 1:45. I wasn't going to make it. I rousted Derek to get the one headlamp that was working (another thing to fix before El Cap) and told him I was going to scramble over the top of the wall and pee up there. I was tied in with about ten feet of slack on the lead line and this was enough to grab the top of the wall, pull over, and find a good spot for peeing. I then downclimbed back to the ledge. Derek did the same. 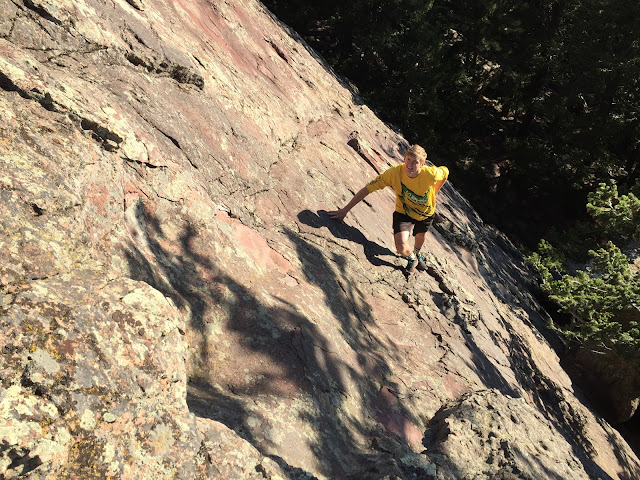 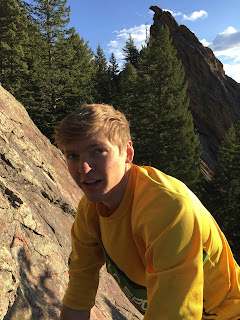 At around 5 a.m. a couple of hikers came by in the dark, headed for Mallory Cave. They didn't notice us, of course. We blew their minds a bit when they descended around 6 a.m. and we were up moving about in the light. I got up at 5:30 a.m. and climbed to the top of the wall again. This time I unroped and moved about taking photos of Derek on the ledge. I even went back down to the base to take a photo, before scrambling back up to the top, tying into the rope again, and downclimbing back to the ledge to help pack things up. Ah, the advantages of climbing these little walls instead of those big walls...

We stuffed the gear into the haul bag and then broke down the ledge and slipped it into it's own little haul bag. I then rapped to the ground with the ledge clipped to my harness. Derek lowered the haul bag to me and then he rapped off as well. Things had gone so well!

We packed everything up, and then dropped it at the base of Der Freischutz. We then took a quick scramble lap to the top in perfect weather and glorious morning sunshine. Then we shouldered our heavy loads and hiked back out to NCAR. We got home at 8 a.m. This was a blast, despite the difficult sleeping conditions. I can see why climbers prefer to each have their own ledge, but this is all we've got and it will be fine. Our plan for Lurking Fear is to spend just one night on the portaledge. 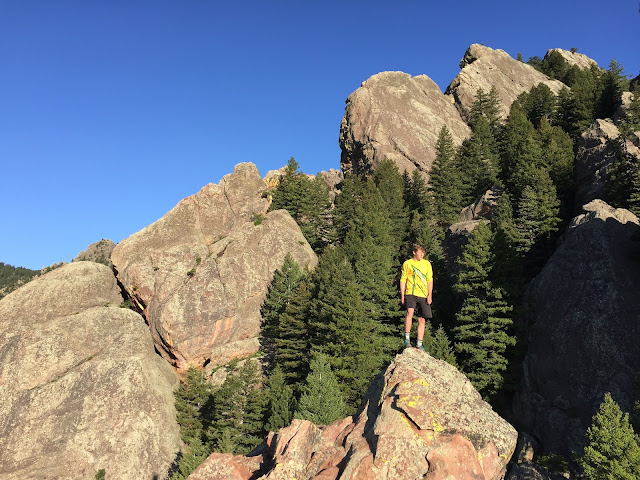