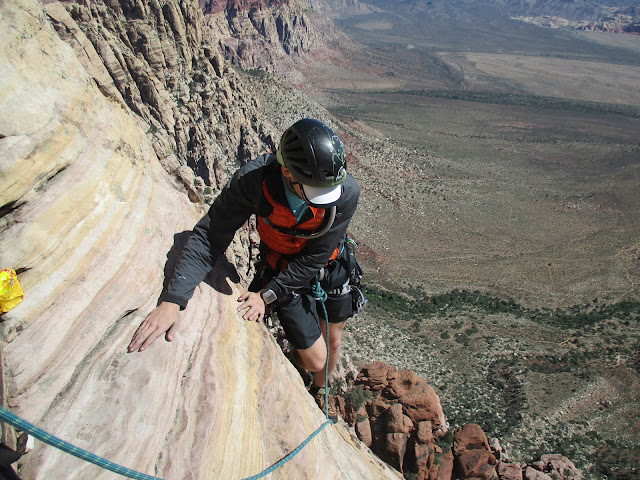 Derek got an internship at SpaceX's Vandenberg site on the California coast. Not surprisingly, he was incredibly stoked about it. While SpaceX was paying for his housing and supplying free food on the base, he would need a vehicle to get him to/from work. We lent him our old Land Cruiser - the vehicle he drove in high school - and Sheri and I drove out with him over a long weekend.  Since we were driving right by lots of climbing areas, I figured we'd have to do an adventure along the way. 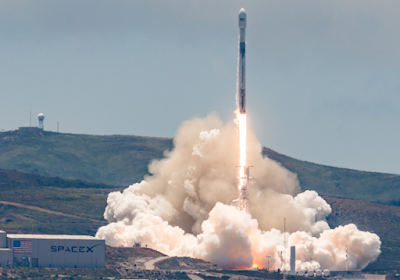 The time of year the best choice was Red Rocks, at least for a big adventure. It was too early for Notch Peak, my first idea. The longest routes at Red Rocks were on Mt. Wilson. I had previously climbed the Resolution Arete and Inti Watana had been on my list since I'd heard about it. It appeared to be an easier start to the RA, climbing 12 pitches up the face to the right of it. Inti is 12 pitches long and rated 10c and it leads to the last eight pitches of RA. A twenty-pitch route sounded just right for Derek's first Red Rocks climb. He thrives on adventure.

We got to Vegas early afternoon on Friday. The day before the temperature was 104 in Vegas. Friday was 97. Saturday the forecast was for 84. How lucky was that? Red Rocks is higher and cooler than Vegas and Inti's lower half is shaded, so I was more worried about a slight chill than being too hot. We decided to both wear small packs with 2-liter bladders. This worked out just about perfect.

We got up at 4 a.m. and tried to quickly slip out of the hotel room without disturbing Sheri too much. We heated up our previously-bought, breakfast burritos and then didn't eat them until we were at the base of the route and six pitches up. We drove out to the trailhead and were hiking at 5:15 without headlamps, though we carried them just in case for the descent. I was a bit surprised and glad that we were the only car in the parking lot.
The approach was pretty well marked and I remembered some of it from my last time in here and we had no trouble finding the start of the route. We were the only ones around. I ate half my burrito and we geared up. We got great beta from my friend Ryan Marsters concerning the rack (one set of cams to #4) and advice to link pitches on Inti. The second pitch had the crux of the route, at 10c, so I took the first lead. Yes, Derek is quite a bit stronger than me in the gym - he climbed 13a this past gym season while I only managed 12b - but outside I still take the crux pitches, as Derek is still gaining experience with placing gear and route finding and the subtleties of real rock.
I thought the first pitch, rated 5.9, had some tricky sections, but I soon arrived at the first belay and continued straight into the next pitch. All the climbing had been protected by bolts on the first pitch and I placed one piece, in addition to the bolts, on the second pitch. The crux section baffled me for a bit and went up and down a couple of times before finding a solution off to the right that involved a dicey move up to a good hold and then a step back to the left where I could place my one cam. Above the climbing eased and soon I had Derek on belay.

Derek followed nicely, also with some thought at the crux, and then took the sharp end and strung the next two pitches (5.8 and 5.9) into a massive 225-foot lead. We were climbing with a single 70-meter rope and I had no rope left when he called down, "Off belay." I followed and then strung the next two pitches (5.7 and 5.7, probably) up to a nice ledge. We took a short break here and I downed the rest of my burrito.

The next pitch was rated 5.9 and was completely trad, so I took the next lead as well, in the interest of speed. I linked the next 5.9 pitch and didn't quite reach the big ledge above before running out of rope. Derek knew what to do and simul-climbed with me for about ten feet. These two pitches were great fun and the crack on the seventh pitch was cool and seemed pretty easy for 5.9.
My TC Pros were killing my heels and, since Derek and I wear the same size shoes, I asked Derek to switch with me. He was climbing in my Mythos since his newly resoled TC Pros were still curing. He graciously did and I continued with a lot less discomfort.

Derek led the next two pitches, both 5.9. It started with a cool roof that was quite overhanging and you had to dangle a bit. We could reach holds completely over the lip, but it was so undercut that you'd dangle a bit before cranking up on some big holds. The next pitch, which he strung, I thought was he best on the entire route. It was sustained the whole way. Derek did a great job leading here, nearly running out of rope and slings. He belayed at a semi-hanging stance.

I followed and strung the last two pitches together (5.9, 5.10a). These were bolted and went fine, with a small roof on the 5.10 pitch and some cool climbing up to a ledge where Inti ended. This proved to be a fun alternative start to the Resolution Arete. It's quite a bit easier than Resolution and much faster due to all the fixed protection. All the belays had nice two-bolt anchors with chains.
We took another small break here to eat and drink, but didn't want to linger long, as there were still eight pitches to climb and a long, complicated descent. We were off the clean face we'd been climbing and entered much more complicated terrain consisting of a maze of ridges and gullies. I'd been up it once before and I had a vague memory of parts of it, but the first pitch baffled me. I scrambled up to the ridge top just above us and followed it to a small highpoint. I tried left with no luck and then right. I scrambled down a bit and the across to a mini-face with a dark chimney behind it. I remembered this description and climbed up the awkward, easy, leaning rack on the face to flat spot on another ridge. Just above was the troublesome overhang I remembered well. I belayed here.

After Derek joined me I struggled with the overhang, just like my first time up this route. This section is rated 5.9, but it feels like hard 5.10 to me. It is just so burly. From the ledge I could reach over the overhang, but I was climbing what was essential a tongue of rock and my legs dangled uselessly. I tried to roll into a mantle and couldn't press it out. I backed off, tried again, and barely turned it. Above I traversed easy ground to the left and belayed below a 5.8 offwidth crack.

Derek joined me and I was soon inching my way up the wide crack. I carried a #4 Camalot and it came in handy on this pitch. I was solid and soon on the ledge above. The next pitch was a simple traverse left on the "Catwalk". Above was a crack climbing in an inset. I climbed up to a small stance 130 feet up and set up a belay. The next pitch, the last one of any real difficulty, was cool climbing around a roof seemingly made of loose blocks but all felt solid as I carefully picked my way around it.
We did another pitch or two of relatively easy climbing with a couple of bouldery steps before we unroped. It was a short scramble from there to the summit and we relaxed up there and ate most of our remaining food. The weather had been perfect and would continue. The descent down into Oak Creek Canyon and out was long and complicated and we had to do one rappel. Hiking out the wash was endless and once east of the main escarpment, I climbed out the wash and forged east determined to make a beeline for the paved road instead of trying to head south and pick up our approach route. I didn't handle this decision well and didn't discuss it with Derek. I just plunged ahead. This caused some friction between us and neither one of us handled it well. The bad feelings hung over us for the next few days. It was silly, really. Poor communication and bad behavior doomed us. Fatigue certainly played a factor, but it is no excuse. Hopefully the painful lessons learned will guide our future behavior.